JJ Weeks is an incredible artist who has just released the audio version of his new song “Choices,” that will start impacting US radio stations from May 17th. However, the renowned singer-songwriter has given GOD TV the opportunity to feature the official audio video first (via YouTube).

The Macon, GA-based artist recently signed a solo-artist contract, which is a big deal for those who follow him, and that includes me! As much as I have followed JJ Weeks in the last several years, there’s been a building sense of something fresh and new coming to the table for this amazing artist.

JJ Weeks is of course known for writing and leading hit-making songs like “Let Them See You,” “Alive In Me,” “What Kind of Love,” and “Do Not Be Afraid.” He has now signed his first-ever, exclusive agreement as a solo artist with Ian Eskelin’s Radiate Music. The debut song to release under this new arrangement, “Choices,” will hit digital retail and streaming outlets Friday, April 19, and radio in May.

Radiate Music launched in 2015. With over 20 years in the music business Ian Eskelin has ranged from being a recording artist to a record executive, which gives him a unique perspective in partnering with artists who are passionate about impacting the world with music. He is a Grammy-nominated, two-time Dove Award-winning “Producer of the Year,” who also co-wrote and produced “Choices”.

“I’ve been a JJ Weeks fan for a long time,” Ian explains. “Writing and recording with him has been a real treat, and I can’t wait for people to hear this new music.”

Labeled as a “powerhouse voice” intent on “making a difference in people’s lives,” JJ formed the JJ Weeks Band in 2001. The band went on to release seven acclaimed, full-length albums that sparked the Billboard Top 10 radio hits “What Kind of Love” and “Let Them See You,” as well as songs that have been featured on the official soundtracks for both the high-profile films God’s Not Dead (“Save Us,” 2014) and Four Blood Moons (“Is It Ever,” 2015).

Continuing his journey as a solo artist and touring coast-to-coast, JJ continues to write new songs and will announce more new music slated for release later this year.

The song I personally fell in love with, “Let Them See You,” stands true today for this artist’s heart that he also demonstrates in the message that “Choices” delivers. JJ had shared, “I would sing that little chorus to God every single morning for years before it ever became a song. God obviously saw fit to do something different with it, and we’ve been blown away by what God’s done. Making a difference in people’s lives—that’s really why we do this, we want to be a vessel.”

The JJ Weeks Band originated when JJ, then a worship leader at his hometown church, needed a band for a local worship night. Hitting the road, early on, the group began gathering a loyal fan-base throughout the South East, and it never stopped growing.

Though the group formed in 2001, their first major label released studio album, All Over the World, wasn’t released until 2013, by Inpop Records. They were later signed to Centricity Music where they released their most recent studio album in April of 2016. As Long as We Can Breathe is a collection of songs reminding listeners of God’s peace and presence through a mix of pop hooks and ballads. 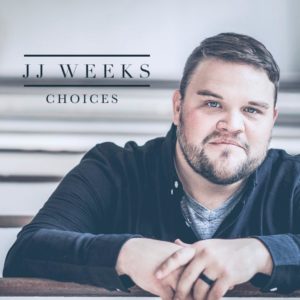 JJ’s upcoming tour traverses nine states with events at churches, fairs and festivals like AtlantaFest, Hills Alive and more. With the new single, “Choices,” being released on May 17, I can’t help but wonder with excitement how much more we have to look forward to from him this new season. The doors of opportunity being opened to JJ are extraordinary. He has planted some incredible seeds over the years, and I do believe it’s time to gather the fruit of this harvest.

JJ shares, “Our lives are full of choices, and the choices we make today affect our tomorrows. And our tomorrows become our future. Every choice that we make, whether it’s big or small, whether it’s great or insignificant, should be made through the filter of the God we serve; through the lens of our faith.”

The lyrics of the song “Choices” speaks volumes to me on how each one of us should carry-on, living in a world of what appears to have many troubles. Life can get hard, and there are distractions that may try to hinder our walk and take our thoughts out of focus; but, as we seek the Lord through these trials, following His lead, leaning on Him for strength, it is very important to continue to praise and worship Him through the process. The message I take away from this, is that we can never stop singing! Above the noise, above the heartache and grief that we may face, we must all learn to put love (God), first.

For all the latest news about JJ Weeks, be sure to visit www.jjweeksband.com.

For just $100 per month you can bring the gospel to 10,000 homes. Join us as media missionaries! GIVE NOW
VIEW COMMENTS
« Why Are Churches Removing The Cross? 40 Days to Overcome – Day 39 »