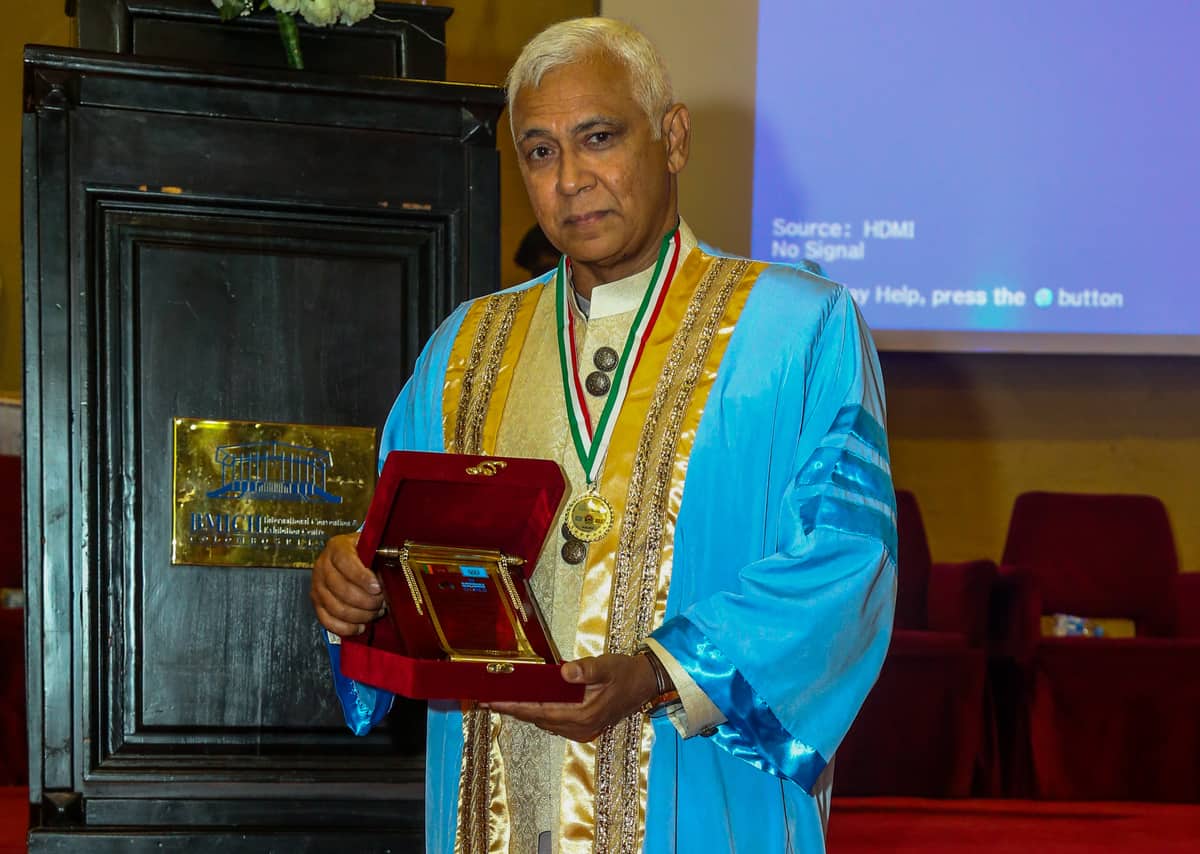 Dr David Nicolle is GOD TV’s Regional Director for Sri Lanka where we have an office in Colombo, servicing our viewers and partners in the region. He has undertaken several humanitarian projects in the island nation, including helping ‘widows and orphans’ in war-torn areas. David received his doctorate this year as well as the honorary title of Sustainable Development Diplomacy Governor.

“We consider that you as a role model for youth in Sri Lanka,” wrote Dr Deshapriya S. Wijetunge who is the Director General of the Sri Lanka United Nations Friendship Organisation (SUNFO) a non-political, non-racial and non-sectarian organization working for peace, harmony and the well-being of mankind.

“With due recognition of your services to the country and people, your name has been proposed to the high level honorary title and prestigious high award of Sustainable Development Diplomacy Governor,” he said.

The ceremonial presentation took place in Colombo on Sunday 24 June where David was accompanied by his family (below). In his speech to the Sri Lanka and United Nations Committee for Sustainable Development he spoke about goals that a nation should strive to achieve. David echoed the famous words of Dr Martin Luther King’s ‘I Have A Dream Speech’ sharing his hopes for Sri Lanka to be a society where justice and peace prevails. He also shared about the importance of having good values and outlined some of his humanitarian aid projects to the poor and needy.

David’s speech was delivered to assembled guests that included the Speaker of Parliament, Hon Karu Jayasuriya and the Chairman and Board of Trustees of SUNFO. Part of his speech follows:

“I wish to speak to you this morning of Goal 16 – the promotion to practice justice and peace in society, while building an effective and accountable environment at all levels in this nation of ours,” David told the assembled guests.

“Let us in retrospect visit a dark period in America in 1963 when Dr Martin Luther King said ‘even though we face the difficulties of today and tomorrow, I still have a dream… I have a dream that one day this nation will rise up and live out the true meaning of its creed… that all men are created equal.’ You may ponder as to why I choose to quote a 1960’s speech about the emancipation of Black Americans? Simply because I see a parallel in the America of the 60’s and Sri Lanka…” he said.

“I too have a dream that our society that will embrace these virtues. Values begin with the individual, with one’s self. One has to value themselves in the same manner they value others. Value is accessed by the accountability to one’s self first, long before one is willing to be accountable to others.

“If one were to rob a nail from a railway sleeper at a young age and not be correctly reeducated that it was an act of robbery and one against society, this person would return years later only to rob the very rail track or even the train itself. If they were never taught to value a nation’s assets how would they know the difference, when the basic instinct of mankind is one of survival?

“Individuals need to be trained into society with values that can be cherished and not ones that are counterproductive to themselves nor to society. The child has to be mentored into a good value system.

“It is up to us as individuals to form a nation that has harnessed good moral values through our actions and not merely speeches. Beauty or disdain is in the eye its beholder. We must cling to virtue and insist on practicing good governance at all times.

“As a recipient of the honorary title of Sustainable Development Diplomacy Governor these are values that I cherish, practice:

“You might ask the question as to how these goals were achieved. My answer is that I chose to dream a dream, that was fuelled with the passion to succeed. It is good to dream, but let those dreams create a vision to strive to make Sri Lanka a better place,. The answer lies in all of you, your dream must become your covenant.”

Read about Dr Nicolle’s outreach to Sri Lanka. Sri Lanka Update: What is God up to?