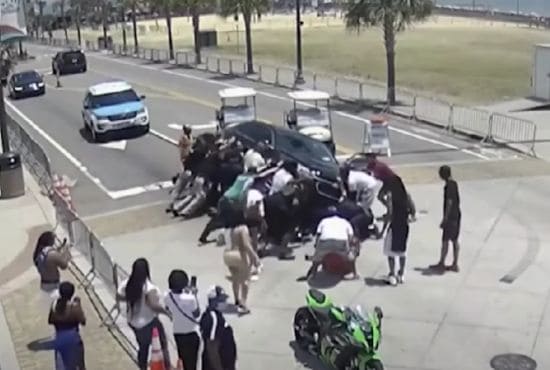 Dozens of good Samaritans and police officers rushed to rescue a motorcyclist who had been trapped underneath a vehicle.

In Myrtle Beach, South Carolina, a seemingly fatal situation happened when a vehicle crashed into a motorcycle. The impact knocked both the riders of the motorcycle and trapped one of them underneath the car.

The entire ordeal was captured on video footage. Some of the on-lookers assessed the situation in an attempt to help. When the police officers arrived at the scene, dozens of good Samaritans flocked in to help rescue the man. Together with the authorities, they moved the car off of the trapped man while some of them pulled the man away.

Motorcyclist trapped underneath a car

The Myrtle Beach Police Department posted a statement on their Facebook page to thank all those who helped that day.

They also expressed how thankful they are to live and serve a community where people are ready to help one another.

“We are lucky to live and work in a community where everyone is ready to work together to help others,” the statement continued.

Thankfully, both the riders of the motorcycle were safe. After the rescue, they were immediately rushed to the hospital to be treated for only minor injuries.

Upon investigations by the authorities, they found an open container of alcohol inside the car. The driver of the vehicle was arrested following the incident.