Good Things Happen For Those Who Wait! Congratulations Pour In For Tim and Demi | God TV
Articles 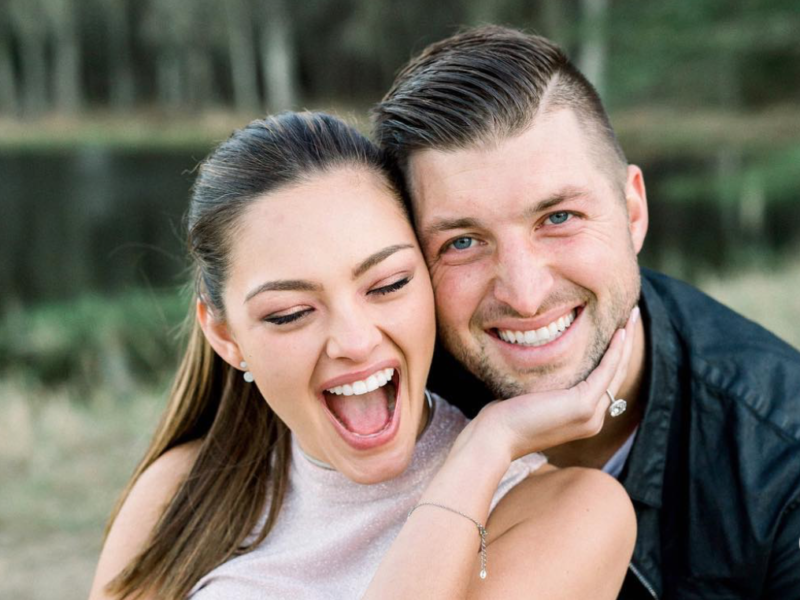 Sporting hero, Tim Tebow has been ridiculed by those who don’t understand his commitment to remain a virgin until marriage. At 31 the thinking of the world is that he is abnormal for waiting to have sex. Now that he has just got engaged to former Miss Universe, Demi-Leigh Nel-Peters many people have taken to social media to commend him for his Godly example.

GOD TV’s Facebook page has received many messages of congratulation for the engaged couple since the announcement of their engagement.  A few of these include:

Christians have also taken to Twitter to commend Tim…

Plus @BrandonLBlair seems to capture the thinking of Christian leaders. He tweeted… “Tim Tebow refused to compromise his faith and yet still landed Miss Universe. Take notes young fellas!”

This tweet from a youth pastor is a challenge to youth to live a godly life based on Biblical principles which set a standard of purity. It may seem out of touch or old fashioned in today’s world, but God’s Word doesn’t change and His standards remain.

In awe of how God works

“You can truly see their excitement and love shine,” wrote Photographer, Kelly Braman who took the photos of the engagement. “I’m always in awe of God and how He works.”

@timtebow surprised his love, @demileighnp with this truly magical evening full of surprises, love & celebration♥️ I couldn’t love these images more!!! You can truly see their excitement & love shine🙌🏻 I’m always in awe of God & how He works. How fun that I was asked to be a part of this sweet moment! ♥️ How many are too many to share?! #kellybramanphotography

Why should Christians wait?

This can be a controversial issue, but it’s really a question of simple obedience. And after all, the manufacturer always knows best. You may find these articles helpful in answering this question.

In our post 10 Practical Reasons Not To Have Sex Before Marriage Rob Kowalski shares that purity is not an antiquated rule and offers relevant dating advice for people today.

“Sex is a gift from God, but it is not for everyone.” Rob says. “It is not for singles. It is a beautiful gift for married couples. It doesn’t mean that God is depriving singles of this gift, but God is saving people from the pain they’ll experience after giving themselves to the wrong person.”

“He who loves with purity considers not the gift of the lover, but the love of the giver.”

And, in his post Rashawn explains the true value of waiting. “Today’s society has placed sex on a pedestal and elevated it way too high, however the truth is that our culture has brought sex down way too low!”

Whatever your thoughts on sex before marriage, God’s way is best. That doesn’t mean you can’t be forgiven for past mistakes but in order to walk in God’s perfect plan for your life, that takes obedience.

Tim and Demi – ‘For such a time as this’

Tim Tebow has lived out his strong faith boldly under the spotlight of the mass media. It has made him unpopular with some, yet he hasn’t wavered. He has spent much of time off on mission trips in the Philippines and has become a leading philanthropist through the Tim Tebow Foundation which exemplifies his faith in action.

Demi-Leigh has been just as vocal about her faith, sharing her love of God with global audiences during the Miss Universe pageants. The world needs more young people like this who honor God for the position He has given them. They know they are not there just to win a game or a contest but to be an ambassador for God’s Kingdom.

Demi’s success and acclaim as Miss Universe is a reminder of the Biblical story of Esther, perhaps the first winner of a beauty pageant, who realised she was called ”for such a time as this”.  As believers we are called to make a bold stand for God and His standards.

For just $100 per month you can bring the gospel to 10,000 homes. Join us as media missionaries! GIVE NOW
VIEW COMMENTS
« Pitcher For Chicago Cubs Gives His $9.75 Million Mansion to Camp Barnabas Christian Comedian, John Crist Comes Out In Support of Lauren Daigle, Dismissing Critics »