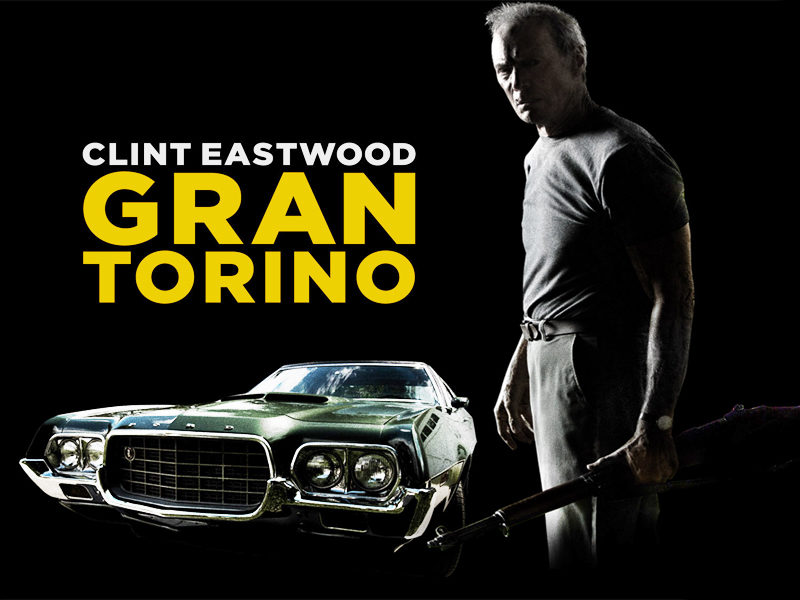 On its original release, Clint Eastwood’s Gran Torino felt like the culmination of a life’s work both in front of the camera and behind it. Obviously he has since gone on to do more both as actor and director, but nonetheless, Gran Torino remains a full stop of sorts that encapsulates many of the themes Eastwood has explored in his most memorable movies.

As Korean War veteran Walt Kowalski, Eastwood is perfectly cast. Indeed, it is difficult to imagine any other actor playing this character, as the role has been written specifically with Clint Eastwood movie character baggage. Initially, at least, Walk appears to be Dirty Harry in retirement, yet as the film progresses, Eastwood’s subtle and layered performance captures the grouchy nuances of a complex, and altogether unexpected character.

Opening at his saintly wife’s funeral, Walt quietly fumes as he watches his spoiled grandchildren texting in the service. His estranged sons provide no comfort for him, especially as they want to put him into a retirement home. Walt himself is unwell and spends most of his time performing DIY tasks, drinking beer, talking to his dog Daisy, and moaning about how his sons don’t buy American products.

The funeral wake is contrasted with a baby party his Asian neighbours are engaged in at the same time, suggesting something new is about to emerge from the ashes of Walt’s own life. Because of his experiences in Korea, Walt sees all Asian people as essentially the same, and he is equally xenophobic about other races living in his neighbourhood. However when Thao – a troubled teenage boy from next door – attempts to steal Walt’s most prized possession, a mint condition 1972 Gran Torino car, events take an unusual turn. Thao’s family are mortified at his attempted theft and insist he helps Walt around the house to make up for it. Walt reluctantly accepts, but when it transpires that Thao’s efforts to steal the Gran Torino were part of an initiation to join a dangerous neighbourhood gang, Walt decides to take the boy under his wing. He becomes an extremely unlikely mentor, inspiring him mainly by insulting him. Soon he has Thao getting a job at a construction site and going on a date with a girl he was previously painfully shy in front of. At the same time, Walt also saves Thao’s bright sister Sue from being accosted by a gang, and the two form an unlikely friendship. She invites him into their house and he slowly becomes a family friend.

Prior to her death, Walt’s late wife persuaded young Catholic priest Father Janovich to look after her husband and to get him to confess his sins. At first, Walt is having none of it and gives the persistent young priest a very hard time. However, as events in the story progress, Walt’s actions become increasingly redemptive. Whilst he still refers to his neighbours with all manner of racial slurs, right to their faces, it becomes clear that he has more in common with their honourable ways than that of his own spoilt family. A grudging mutual respect develops, and soon Walt wants to do something to ensure that Sue and Thao’s lives are no longer plagued by the gangs in the neighbourhood.

Clint Eastwood’s spare, stripped-back and deceptively simple directing style once again proves he is second to none at allowing his story and characters to breathe. Dave Johannson and Nick Schenk’s screenplay does not rush things but moves slowly yet compellingly. The film is also very funny and contains several laugh-out-loud moments often as a result of Walt’s grumpy old man persona. The “Get off my lawn” line has become as memorable as “Do you feel lucky punk?” and other classic Clint one-liners. However, it’s also only fair to point out that the film also contains a lot of strong language and some violence, which I know will put off certain viewers.

Ultimately, Walt’s mentoring of Thao is an unashamedly old school, if unorthodox, form of discipleship. Whilst Walt has issues of bitterness and lacks tact, his tell-it-like-it-is attitude actually does Thao great favours. Gran Torino is also a fearless exploration of racism and ageism, unfettered by political correctness. But it is even more than that. It is, above all, a profound parable of sacrifice and redemption. However, I wouldn’t dream of spoiling that part. You have to watch it yourself.

For just $100 per month you can bring the gospel to 10,000 homes. Join us as media missionaries! GIVE NOW
VIEW COMMENTS
« Lecrae – Mayday (Official Music Video) I’m a Warrior for Jesus When I’m Down on My Knees: Prayer is a Weapon! »