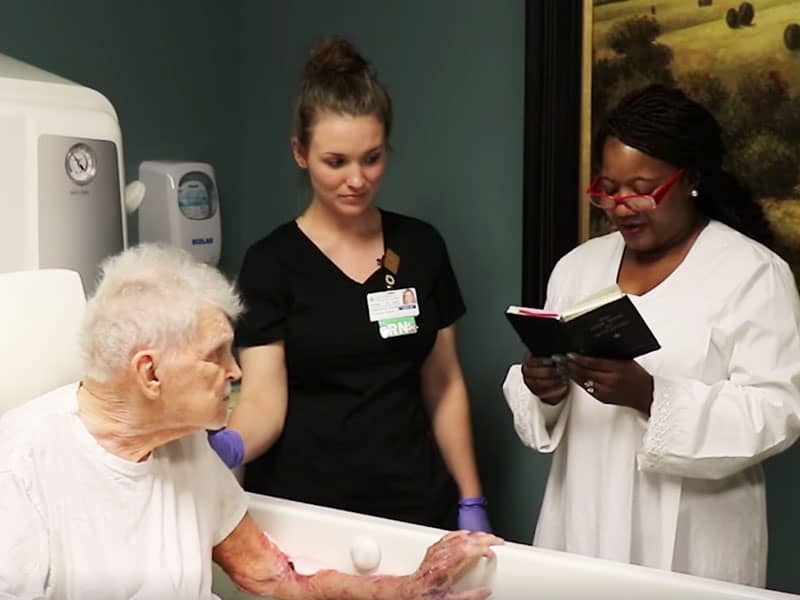 A grandpa from Spartanburg, South Carolina diagnosed with terminal cancer and his final wish is to be baptized in water.

Jenis Grindstaff had been an air traffic controller for 25 years. He had also served in the Navy stationed in Cuba and Guantanamo. But today, he is in his 80’s and dying of cancer. Jenis is in the care of Spartanburg Regional Hospice Home.

Grandpa Wishes To Be Baptized In Jesus’ Name

Despite the struggle of fighting cancer, Jenis requested to be baptized. And he didn’t want just water sprinkled, he wanted to be immersed in the water.

“I’ve always loved Jesus,” he said in an interview.

Moreover, one of his son revealed that his dad had always read the Bible. Everyone in their family have already been baptized yet Jenis had not. But with the end of life looming before him, Jenis wanted to profess his faith by being baptized in water as it’s written in the Bible. He sensed “something missing”.

“The rest of his family, his brothers and sisters, have been baptized, and for some reason or another, he just never got around to getting it done,” his son Craig revealed.

And so without hesitation, the staff members at the home hospice granted his dying wish.

Using the hospice special needs fund, the hospice team found another way to baptize him. His condition wouldn’t allow him to be baptized at home or in a traditional baptismal pool. Instead they used a 60-gallon tub with a seat and a door just fit for a patient to walk in and sit down.

And at last, the chaplain then baptized Jenis, “My beloved son, Jenis James Grindstaff, I now at this time baptize you in the name of the Father, Son, and of the Holy Ghost and in Jesus’ Name.”

When Jenis got up from the water he said, “That felt good.”

Finally, Jenis was baptized like his beloved Jesus. Now there is nothing missing, nothing left undone for Jenis. He can go home to the Lord in peace.

The video of Jenis’ baptism has gone viral with over 200,000 views. Jenis hopes his baptism will help evangelize the lost.

For just $100 per month you can bring the gospel to 10,000 homes. Join us as media missionaries! GIVE NOW
VIEW COMMENTS
« Disney’s New Jasmine Is An Advocate for Compassion International Lou Engle Shares His Heart For AWAKEN 2020 »