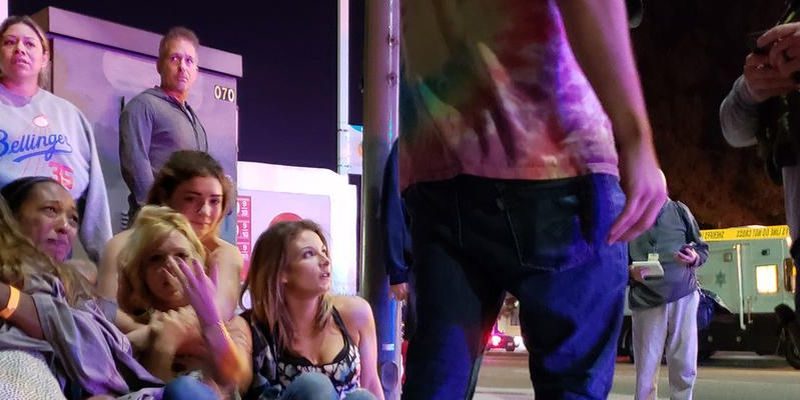 Last night around 11:20 PM a gunman opened fire in a bar filled with college students and young people. At least 12 people have been killed, with more sustaining injuries.

The bar, Borderline Bar & Grill in Thousand Oaks, is a western-themed establishment and was hosting a college night attracting many students from California Lutheran and Pepperdine University.

“Officers arrived on the scene 2 to 3 minutes after the initial call to law enforcement as shots continued to ring out, Dean said.

As they entered through the front door, Helus was hit by multiple bullets, Dean said. The highway patrol officer stepped back, pulled Helus from the line of fire and secured his post until more officers arrived.

At least 12 people were killed, including Helus, a 29-year law enforcement veteran.”

The suspect is believed to be a 29 year old man who wore a dark trench coat to conceal a short-barreled handgun.

It’s been reported that the motives of the gunman are still unclear but discovering this is top priority.

Will knowing the why make us feel better? Do we want it to be as simple as a predisposition to violence “he was always an angry child” or as complex as traumatic brain injury? There’s no easy answer and asking the questions can only help prevent future crimes but will not save those 12 lives.

These 12 souls will become part of the gun reform discussion, debate, used as an example, used as a weapon for political agenda. Their families will be forced to ask and answer the whys all their lives.

Where do we stand as Christians? We’ve been criticized for offering up prayers rather than taking action. Yet as Christians we believe that prayer is action and we are waging a war in a very real, very active spirit realm (Ephesians 6:12) that impacts the natural. And I believe we have God-fearing men and women in our communities, our churches, in science and government working towards solutions as well as praying.

So today as debate arises, as anger and pain is expressed, let out rhetoric be honoring and Spirit-led. We can do more for our country by FIRST having the mind of Christ, and then acting.

Here are some scriptures to guide us:

“In all circumstances take up the shield of faith, with which you can extinguish all the flaming darts of the evil one; and take the helmet of salvation, and the sword of the Spirit, which is the word of God, praying at all times in the Spirit, with all prayer and supplication. To that end, keep alert with all perseverance, making supplication for all the saints.” (Ephesian 6:18)

“Fools give full vent to their rage, but the wise bring calm in the end.” (Proverbs 29:11)

“For man’s anger does not bring about the righteousness that God desires.” (James 1:20)

“The mouths of the righteous utter wisdom, and their tongues speak what is just.” (Psalm 37:30)

“Let your conversation be always full of grace, seasoned with salt, so that you may know how to answer everyone.” (Colossians 4:6)

“Sin is not ended by multiplying words, but the prudent hold their tongues.” (Proverbs 10:19)

For just $100 per month you can bring the gospel to 10,000 homes. Join us as media missionaries! GIVE NOW
VIEW COMMENTS
« Bingo Cosby, Surfer For Jesus and Fisher of Men Man Who Lived With A Crushed Back For 38 Years Didn’t Think God Could Heal Him. »