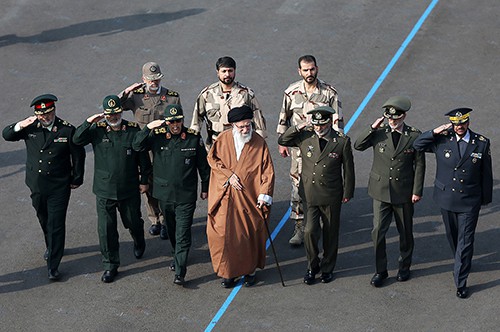 Hamas leader Ismail Haniya met earlier this month in Beirut with opposition figures from Bahrain for a first-of-its-kind meeting to coordinate activities against the peace agreement between Israel and Bahrain.

Representatives of Fatah, Islamic Jihad, the Popular Front for the Liberation of Palestine (PFLP) terror groups and the PLO were also present at a meeting with members of the pro-Iranian Al Wafaq association, whose activities were banned in Bahrain.

Haniya’s meeting was also preceded by a meeting with Islamic Jihad secretary-general Ziad Nahala and elements from Bahrain.

Haniya called during the meeting to bring about a uniform Islamic position against the normalization measures while Nahala emphasized the importance of “unity between Shiites and Sunnis in protecting the Uma (Muslin nation) and its sanctuaries.”

A source in Bahrain told TPS that this is the first time Hamas has openly intervened in Bahrain’s internal affairs and that this step is a Hamas provocation that is inspired by Shiite Iran and backed by Hezbollah.

The source said Hamas’ actions were a provocation and that the US should now focus its efforts on Hamas and on the Iranian involvement in Bahrain, both of which are working to thwart the US-led peacekeeping trend in the region.

This meeting follows a long series of protests in Bahrain by Islamic associations, intellectuals and clerics against the peace agreement with Israel.

In a statement issued by 143 Bahraini clerics, who are mainly members of the Shiite population, they condemned the peace agreement with Israel and emphasized their support for the Palestinians.

“Our religious principles invalidate the normalization of relations with the Zionist entity and we stand by the Palestinians and state that Jerusalem is Islamic land, which should not be given up or Judaized,” the Bahraini clerics said.

Recently, Sheikh Issa Qassim, the leader of the pro-Iranian Al-Wafaq party, called on Bahraini residents to oppose the peace agreement and, under his auspices, nightly demonstrations were held in the country.

“After the failure of the Deal of the Century, the normalization of Israeli-Arab relations has become an alternative means of resolving the Israeli-Palestinian conflict and Arab states believe that through it they can get closer to the United States,” he asserted.

The Revolutionary Guards said that “the ruler of Bahrain must expect painful Islamic revenge on the part of the fighters for the liberation of Jerusalem.”

Bahraini writer Qassem Hussein recently wrote that most of Bahrain’s residents, Sunnis and Shiites, Arabs and non-Arabs, stand by the residents of “Palestine” and reject the normalization of relations with Israel.

Hezbollah has also made threats against Bahrain and in a statement on its Al-Manar channel, promised that the response would come from “the parade of free peoples” and Palestinian opposition factions.

In recent years, Bahrain, which is backed by Saudi Arabia, has been the target of several Shiite attempts to shake up the stability of the regime. With the outbreak of the “Arab Spring” riots, the Shiite population in Bahrain revolted and the blame was placed on Iran. The Saudis came out to help Bahrain suppress the riots.

The population of Bahrain is 60 percent Shiite while the royal house is Sunni.

In 2016, the Shiites demonstrated in Bahrain following which the royal family accused Hezbollah of aiding and abetting Iran and being behind the Shiite demonstrations in its territory. In the same year, Bahrain recognized Hezbollah as a terrorist organization.

Iran, which has made claims to the Bahraini island in 1968, before the independence of Bahrain, has a tense and hostile relationship with Bahrain, which agreed to host the US Navy and took political positions in favor of the Saudis when they were in conflict with Iran.

For just $100 per month you can bring the gospel to 10,000 homes. Join us as media missionaries! GIVE NOW
VIEW COMMENTS
« Dad Builds Desks For Low-Income Students During Pandemic Improved Vision Results In Acceleration Of Mission »