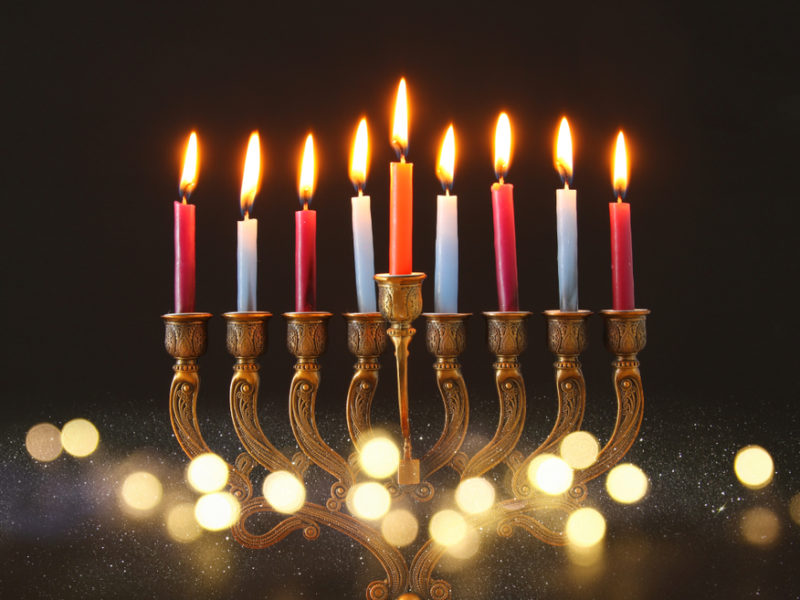 Israel is celebrating the ‘Festival of Lights’ this week and we wish all our Jewish and Messianic friends a Happy Hanukkah!

Israelis and Jews around the world lit the first candle for Chanukah last Sunday night, December 2nd to celebrate the holiday that commemorates the rededication of the Second Temple in Jerusalem in 160 BC after its defilement by the Syrian Greeks. A new candle is lit each day until Monday.

Judah the Maccabee led the Jews in a revolt against the oppressive and anti-Semitic policies of Antiochus, king of the Seleucid Empire, for three years. When the Jews won, they restored the Temple and rebuilt the altar, which had been desecrated. The Hebrew word means “dedication.”

“At that time the Feast of the Dedication took place at Jerusalem; it was winter, and Jesus was walking in the temple in the portico of Solomon.” (John 10:22-23)

Aside from lighting the eight candles on the Chanukiah, two new traditions have become popular in Israel in recent years: The unofficial competition by bakeries to make the fanciest sufganiya (doughnut) in the country, overshadowing the humble jelly doughnut that marks the holiday; and, the other unofficial competition — to create a new and unique Hanukkah song. Both of these traditions are in full swing this year.

Going viral this year is the band, Six13, with it’s “Bohemian Chanukah.” See the video below which is a light-hearted look at the story behind the holiday, with cleverly adapted lyrics to the tune of Bohemian Rhapsody.

For just $100 per month you can bring the gospel to 10,000 homes. Join us as media missionaries! GIVE NOW
VIEW COMMENTS
« Gospel Singer Based In United Arab Emirates Urges Believers To Go Light Their World Martyr John Chau’s Video Message to Christians Before His Death »