Healing Oil. The old Bible Jerry Pearce has used for 17 years started leaking oil in January last year and the oil hasn’t stopped flowing since. On God’s instruction, he and his colleague, Johnny Taylor have been sharing this oil freely with all who are sick and the result has been phenomenal as testimonies of healing have been received. GOD TV CEO, Ward Simpson talks to them on the latest episode of Today With Ward and you can watch the interview in the video above.

“This sounds like a tall story to me, whoever heard of a Bible leaking oil?” you may say and dismiss this ‘healing oil’ outright… However, remember the Bible is full of miracles we cannot explain in the natural, including many where we see supernatural multiplication. Remember the story of Elisha and the widow who collected jars to be filled with oil. (2 Kings 4:1-7) So long as the jars kept coming, the oil kept flowing and that seems to be exactly what’s happening at Flowing Oil Ministries. 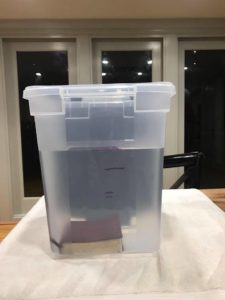 According to the interview, after several days of prayer Jerry opened his Bible to the book of Psalms and found that it was wet. From that day, the 27th January 2017, each time he opened his Bible it became more saturated, from Psalms to Revelation and then from Genesis back through to Psalms. Soon he had to put his Bible into a Tupperware dish and now it’s in a 5 gallon container.

Johnny says the Lord instructed him and Jerry to give the oil way. “Ever since the oil started to flow God told us not to advertise it or sell it. He told us not to try and convince anyone, but to just let Him send us where we need to go.” One of the churches where they have been sent is Church of His Presence pastored by John Kilpatrick who suggested to Ward that he should interview the two men for GOD TV.

“When I first heard of this healing oil, I was intrigued,” Ward says, “we know God can do miracles of multiplication like the five loaves and two fishes that fed 5,000. We know God can do it, but do we believe it?”

In addition to the sceptics who will dismiss any miracle, there are those who will criticise this as a money-making scheme, similar to the indulgences sold in the Church prior to the Reformation or a gimmick of contemporary Christian media. Obviously that is not the case here. God could not have used two more down to earth men as stewards of this healing oil and it is freely available to everyone.

The Biblical Precedent for the transfer of healing anointing

In the Book of Acts we see people being healed through Peter’s shadow (Acts 5:15) and Paul’s handkerchiefs (Acts 19:12) so it is clear the anointing can be passed on. Moreover,  James 5:14 says:“Is anyone among you sick? Let him call for the elders of the church, and let them pray over him, anointing him with oil in the name of the Lord.”

Most Christians will be familiar with this practice of anointing those who are sick with oil and praying for their healing, but we know there’s nothing special about the oil itself. It’s just a symbol of God’s presence and we know His Presence can turn the worst diagnosis around. Using anointing oil is simply a practical application in response to God’s Word and as we do this, acting in faith, He rewards our obedience.

However, the healing oil from Jerry’s Bible seems to have a powerful, supernatural anointing upon it to not only heal the sick but also restore the damage that sickness has caused in that person’s life. It’s no wonder then that Flowing Oil Ministries has already given away over 100,000 vials of healing oil!

Johnny and Jerry believe God is using the oil in this way as He gets all the credit. The miracles do not come through any man. They happen outside church buildings and every manner of disease is healed. Just one healing testimony includes the story of a man about to lose his battle with cancer.

“Judy, Lynn, Leslie and I were called to a house to pray for a man who had stage four cancer,” writes Johnny. “He was given one to two months to live. I asked his mother to anoint him and pray for him and we would agree with her. The following Friday he went to the doctor and was announced cancer free!”

The early days of the Church were a time of phenomenal growth and apostolic miracles. It seems God is taking us back to the book of Acts in a very real and tangible way. If you would like to receive a vial of this Healing Oil visit the Flowing Oil Ministries website. The site is entitled  His Name is Flowing Oil from Song of Songs 1:3 “For your lovely name is flowing Oil.”

For just $100 per month you can bring the gospel to 10,000 homes. Join us as media missionaries! GIVE NOW
VIEW COMMENTS
« Movies with a Message: Ready Player One – ‘A Satisfying, Sugar-Rush Spielberg Blockbuster’ How Do You Cope With Your Parents’ Divorce? New Series Offers Hope »