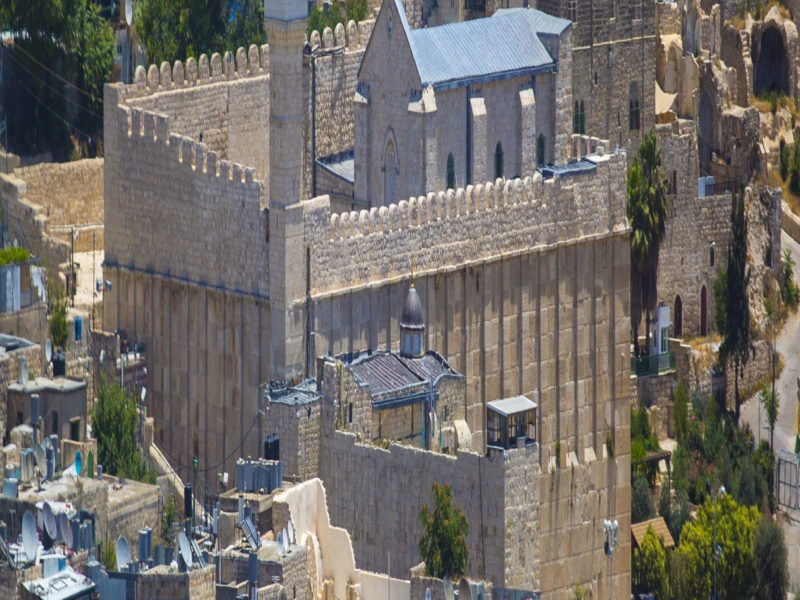 Tensions in Hebron were high on Wednesday as Prime Minister Benjamin Netanyahu visited the city to mark the 90th anniversary of the massacre of the Jews of Hebron, his first visit to the city as prime minister.

Israel held a special event commemorating the 1929 riots in Hebron during which Arabs murdered their Jewish neighbors in the city, killing 67 and injuring scores.

Arab residents put up Palestinian and black flags on their rooftops and in the cemetery near the Jewish neighborhood of Hebron. A reporter for the Hezbollah-affiliated Al Mayadeen news said that movement for Arabs in the city had been restricted, and some nearby stores were forced to close.

Sheikh Ekrima Sabri, head of the Muslim Council in Jerusalem claimed the Hebron Agreement, which divided the city into Israel and Arab sectors, is an act of discrimination, which left the Arab residents at the mercy of “an extreme group of settlers.” He added that Netanyahu’s visit was a “dangerous move, made for election purposes.”

Issa Amru, an Arab Hebron resident and head of the committee against settlers in Hebron, told TPS that “the tension is rising because the residents are worried Netanyahu will make election promises that will strengthen the Jewish Community in Hebron at their expense.”

The Palestinian Authority warned of the severe consequences of “Netanyahu’s actions in Hebron, courting extreme groups.” The PA’s Foreign Ministry called upon the international community to take legal and moral responsibility towards the suffering of the Palestinian people and condemn the visit.

Mahmoud El-Habash, Supreme Shari’ah Judge in the PA and PA head Mahmoud Abbas’ Advisor on Religious and Islamic Affairs, criticized the visit, claiming that “anyone who is not Muslim has no right at the Cave of the Patriarchs, and Netanyahu’s visit is a crime and against international law.”

The Spokesperson for Hamas announced that Netanyahu intended to “break into” Hebron and the Cave of the Patriarchs, and that his visit  is a “Zionist ploy to hurt the Muslim symbols.”

Other Palestinian organizations also called the visit a “break-in” and called upon the residents to demonstrate against the visit.

For just $10 per month you can bring the gospel to 1,000 homes. Join us as media missionaries! GIVE NOW
VIEW COMMENTS
« Mosaic Floor Exposed Near Sea of Galilee, Possibly Depicting New Testament Miracle Incoming Tourism in Israel Continued to Rise Over the Summer »