written by The Israel Insider January 1, 2022 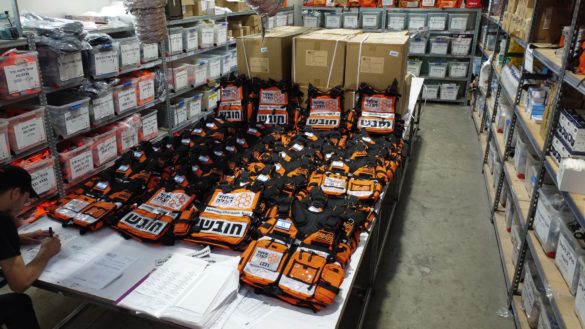 The Helmsley Charitable Trust has sponsored 708 sets of bullet proof vests and helmets to United Hatzalah for the use of emergency aid workers in areas within the range of Hamas rockets launched from Gaza.

During Operation Guardians of the Wall, Hamas launched 3,440 rockets at Israeli cities in the Gaza periphery and beyond. The rocket barrage claimed the lives of ten Israelis and injured dozens more.

While many of the volunteers in and near the Gaza periphery had full safety equipment, including a bulletproof helmet and vest, an additional 1,500 bulletproof helmets and vests were required by the organization in order to outfit other first responders now that Hamas rockets were reaching a much wider area.

United Hatzalah President and Founder Eli Beer turned to The Leona M. and Harry B. Helmsley Charitable Trust and asked them to help support the effort and assist the organization in purchasing the much-needed equipment to protect the volunteers.

“The Helmsley Charitable Trust helped us during the national emergency facing the country in May and enabled us to purchase this equipment. Following the rocket attacks from Hamas earlier in the year, and the rising wave of terror attacks in Jerusalem, this protective gear is more vital than ever,” Beer said.

“Over the past few weeks, Israel saw an increasing number of terror attacks, especially around the old city of Jerusalem. Whenever our volunteers respond to such incidents, where their own lives may be put at risk, it is reassuring to know that they have this equipment that helps to protect them so that they can help those in need and return to their families and loved ones safe and sound after it is over. I cannot thank the Helmsley Charitable Trust enough for their continued support of our efforts in order to save lives in Israel. Thank you,” he concluded.