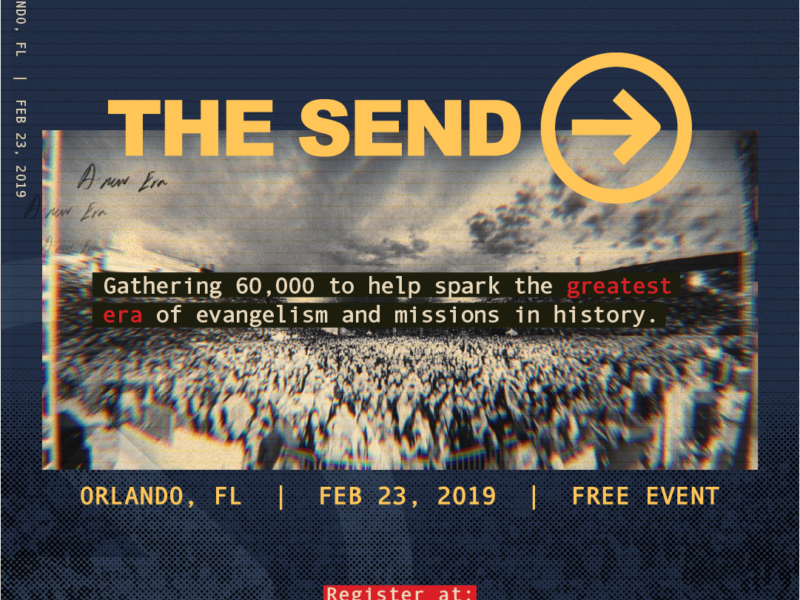 My spirit is excited! The Send is a collaboration of ministries hosting a stadium gathering. Their website says it is, “to catalyze every believer into a lifestyle of Christ-like action.”

They are believing that 60,000 people will be at the event with many more streaming online. I am grateful that my 13 year-old son and I will be there at the Camping World Stadium in Orlando, Florida on February 23rd.

When I was 20-years-old, I attended TheCall DC where nearly half a million Christians were on the US National Mall, praying and fasting. I’d always had a vision in my spirit of a huge youth gathering in Washington, DC. And when attending a YWAM school in 1999 Che Ahn of Harvest Rock Church, Pasadena, came and told us about TheCall. I knew immediately I will be part of it.

That day, September 2, 2000, changed my life. Unlike most events today, special speakers and worship groups were not advertised for the solemn assembly. People from all across America and other nations prayed and worshiped, seeking God’s face on that powerful day.

Afterwards, I participated in TheCall Revolution, which was 40 days of prayer, fasting and evangelistic outreach. And I helped start campus Bible clubs, empowering students to lead the groups in their public schools. TheCall was part of equipping me bringing Christ to campuses through their materials.

However, at the time, I was disappointed that there was minimal media coverage for TheCall DC. But that didn’t stop any of us. A few years later my wife and I attended TheCall LA at the Rose Bowl in Pasadena, California. I eventually lost touch with Lou Engle’s ministry, only peeking in from time to time. Raising a family, working and serving as a US Marine took a lot of my time.

My kids are now older, and upon hearing about another gathering on July 16, 2016 called Together 2016, we took our family, meeting up with some ministry friends and their kids. Again on the US National Mall, this gathering didn’t disappoint. With more of a Millennial generation flavor, and the energy of a hip-hop festival, an emphasis on evangelism was present. But sadly, due to the extreme heat in mid-July and numerous heat cases, this event was shut-down earlier than expected. The Together events are led by Nick Hall’s Pulse Ministry, unrelated to TheCall.

Though Together 2016 was impactful for my family, personally I think it was missing the element of consecration I received through TheCall.

When Billy Graham was lying in state at the US Capitol Rotunda, I took our family to Washington, DC to pay our respects. Standing near the late great evangelist’s coffin, Jesus granted me a vision. And it repeated itself throughout the night until arriving home to write about it. The prophecy was published the next day, going viral through numerous Christian media platforms for God’s glory. Portions of the prophetic word are following:

“While focusing on the Lord, I was given a vision. Above us was the fresco called the ‘Apotheosius of Washington’ I saw a mantle falling to the ground. I was immediately reminded of when Elijah was taken up in the fiery chariot and his cloak fell to the earth in 2 Kings 2. Before the prophet was taken, his student, Elisha, asked for a double portion anointing.”

“I asked the Holy Spirit, ‘Who will take the mantle of Billy Graham?'”

“But then I heard the Holy Spirit say, “It is not for just one person, but for a generation. The anointing for revival is for a generation that hungers and thirsts for righteousness. It is for a generation that knows Me intimately. When Billy Graham received his anointing, it was also available to others as the mantle belongs to the Lord and He gives it as He wills, yet many are called but few are chosen. And many decided not to walk with the mantle of the Lord, but Billy Graham was a willing vessel, surrendered to the Risen Savior. But now, the mantle, the authority and the anointing that he had on his life is available to this present generation who will make a way for the coming awakening.”

“I began praying for the generation that will pick up the mantle of the Lord, carrying the Gospel around the world like never-before. Honoring those who have blazed the trail before us. The anointing for this is accelerating as those who hunger and thirst for righteousness are saying, “Here I am Lord, send me.” As one of the greatest preachers of our time has passed on to his Heavenly reward. And those of us crying out know we need to pick up the mantle. And carry the anointing of the Holy Spirit to the ends of the earth.”

The Send Is Contending for Billy Graham’s Mantle

Even though I’d lost touch with Lou Engle and other ministries, several days after my article was released I read that what God showed me at the Capitol Rotunda that evening, He was speaking to many others around the world. Including Lou and Andy Byrd of YWAM that Billy Graham’s mantle is for a generation!

Lou Engle said, “We believe that [Graham’s] mantle is hovering, waiting for thousands to lay hold of it. It is a mantle that is a burden for evangelism. For a new era of Jesus the Evangelist. To manifest a new Jesus People movement harvest to take place.”

For just $100 per month you can bring the gospel to 10,000 homes. Join us as media missionaries! GIVE NOW
VIEW COMMENTS
« Ex-Gangster Puts On Armor Of God In Powerful Pop And Lock Dance Don’t Stand By While There’s An Assault On Fruitfulness »