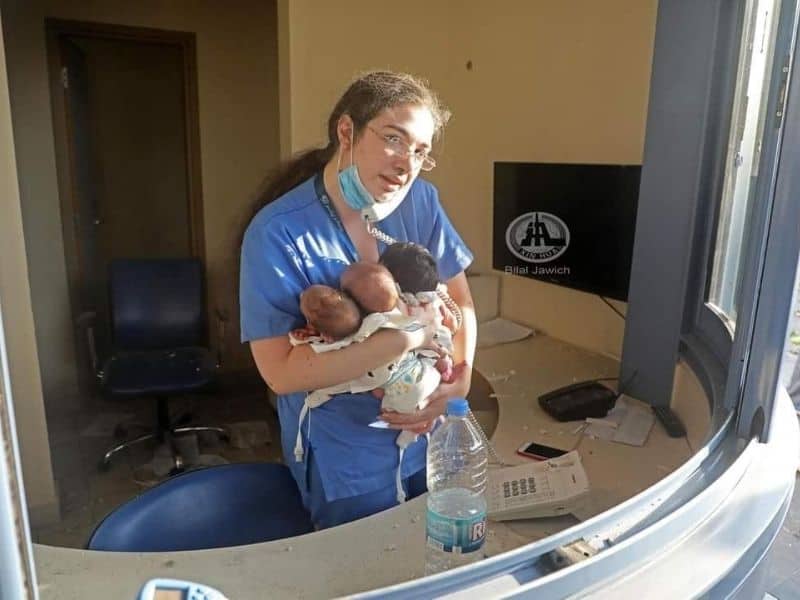 A captured image of a nurse saving three newborn babies during the Beirut explosion is being shared across the internet. People have hailed her as an inspiration for being calm and quick to think about rescuing the babies, putting her life on the line.

Photojournalist Bilal Jawich told CNN Arabic that he was on the outskirts of Beirut when the explosion happened. “I followed the smoke until I reached the port of Beirut,” he said. His “professional intuition” brought him to Al Roum Hospital located in the Ashrafia area. The blast left the hospital severely damaged and non-operational.

The scene astounded Jawich. Panic and fear filled the atmosphere. But one nurse stood out. “I was amazed when I saw the nurse holding three newborns. I noticed the nurse’s calm, which contrasted the surrounding atmosphere just one meter away,” he recalled.

“However, the nurse looked like she possessed a hidden force that gave her self-control and the ability to save those children. People stand out amidst these violent and dark and evil circumstances and this nurse was up to the task.”

Jawich posted the remarkable photo on his Facebook page, hoping it would travel around the world and honor nurses everywhere. “16 years of press photography and lots of wars,” he wrote. “I can say I didn’t see what I saw today in Ashrafia area, especially in front of the Al Roum Hospital”.

The nurse told Jawich that the blast knocked her unconscious in the maternity ward. When she came around “she found herself carrying these three children,” Jawich shared with CNN.

Unfortunately, not everyone in the hospital survived. According to George Saad, the hospital manager of emergency preparedness and disaster, the impact of the explosion took the lives of 12 patients, 2 visitors and four nurses. However, the babies and their mothers are safe and have been transferred to another hospital.