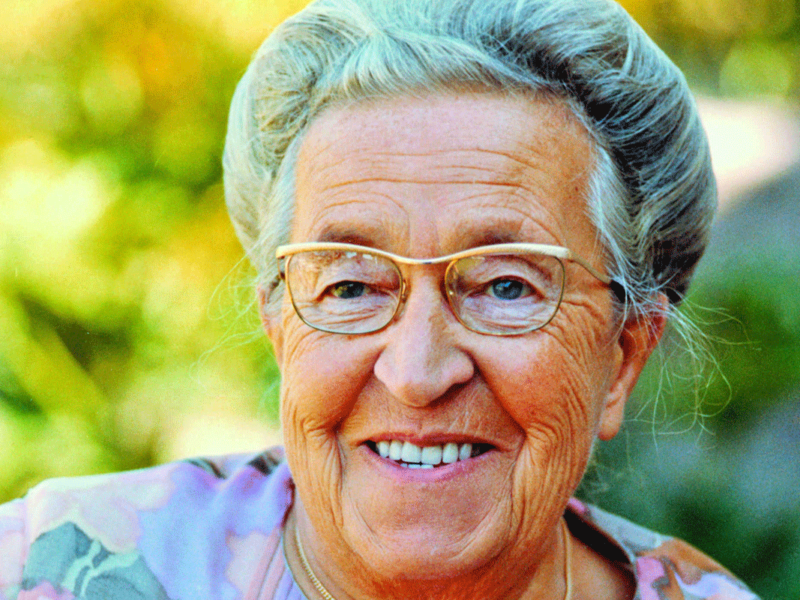 When I became a Christian in 1975 one book that everybody read was Corrie ten Boom’s The Hiding Place. I read it in one sitting – I couldn’t put it down. Although less read today, it remains an outstanding testimony to courage, faith and forgiveness.

Corrie ten Boom was born in Amsterdam in 1892 into one of those wonderful, godly families where faith goes back generations. Her upbringing – lovingly described in her books – included a saintly father who was a skilled watchmaker, and a sister, Betsie, of deep spiritual insight. The family atmosphere was one filled with prayer and care that extended out into the community. Corrie’s family were well known for generosity and had a particularly good relationship with the Jews around them who they considered ‘God’s ancient people’.

Corrie followed her father, becoming in 1922 the first female watchmaker in the Netherlands. In the 20s and 30s she and her family applied their Christian faith through Bible studies and youth clubs, including some for children with disabilities.

When the Netherlands was brutally invaded by the Nazis in 1940, those deep links with the community meant that Corrie and her family became involved in protecting those whom the invaders wanted to seize. They took in Jews and members of the Dutch resistance and, after hiding them within the house, passed them on to the underground network. Within months, Corrie found herself associated with the resistance and involved in risky schemes to obtain enough food in a time of rationing. A secret chamber – the physical ‘hiding place’ of the book – that could take six people was installed behind a false wall in Corrie’s bedroom.

As the Nazi occupation tightened, the role – and the risk – of Corrie’s home being a ‘safe house’ increased. The family was betrayed and in February 1944 all of them, along with thirty other people, were arrested and taken to prison. For Corrie, aged 52, the real ordeal began. She was held in solitary confinement, learning after several weeks that her father had died but that the Jews in the ‘hiding place’ were safe. Reunited with Betsie, she was then sent to a political camp and finally on to the Ravensbrück concentration camp in Germany, where women prisoners were either used as forced labour or executed. Here the health of Betsie, who had always been weak, deteriorated and she died on 16 December 1944 at the age of 59.

Fifteen days later, Corrie was released, seemingly as a result of a ‘clerical error’. A week afterwards, all the women in her age group were sent to the gas chambers. After a painful journey back to the Netherlands, she was reunited with the surviving members of her family and, with the war coming to an end, opened her home to those in need, this time many with mental disabilities.

After the war, Corrie set up a rehabilitation centre, caring for both victims of concentration camps but also those despised individuals who had collaborated with the Germans. She soon began an itinerant evangelistic ministry which grew rapidly. One challenge that she faced was encountering a German guard who had been cruel to Betsie at Ravensbrück and finding that she could forgive him. For nearly thirty years Corrie preached worldwide, visiting more than sixty countries. In 1971 her book The Hiding Place was published and became a best-seller. In 1977, Corrie moved to California where, after a long illness, she died in 1983 at the age of 91.

It has been estimated that with her family and neighbours, Corrie ten Boom saved the lives of 800 Jews and other refugees. She was honoured by Israel for her work as one of the ‘Righteous Among the Nations’.

The life and witness of Corrie ten Boom gives us a lot to think about, not least her courage and her ability to forgive. I think what strikes me is the all-round richness of her faith. Let me note four things.

First, Corrie’s faith had a foundation. Some people looking at Corrie ten Boom might see what she did as a result of her ‘faith’. In fact, as almost every page of The Hiding Place reveals, her faith was built on Jesus Christ. What she did was based on how Jesus had lived, how he had suffered and how he had risen triumphant over death and evil. When one woman told Corrie that ‘her faith’ must have brought her through, Corrie simply replied, ‘No, it was Jesus!’

Second, Corrie’s faith had a solid formation. Corrie had been a Christian for well over forty years before the storm of the Second World War broke over her. It must have seemed unlikely to this quiet, unmarried repairer of watches that she would ever need heroism or to endure brutality. Yet, as her books reveal, in those decades she had built up deep spiritual resources from constant prayer, Bible reading and worship. It’s a wise principle to build a strong faith: none of us knows what we will have to face in the future.

Third, Corrie’s faith gave rise to intervention. Corrie had a deep, rich faith but she is remembered by history because she lived out what she believed. She was involved in numerous activities to serve others before the war; the crisis of the occupation simply added risk and urgency to what she was already doing. Corrie’s life faith and actions were seamlessly linked.

Finally, Corrie’s faith gave her perception. Corrie learnt to look at situations from God’s perspective. So, she was able to be compassionate to those who abused her because she could see how God saw them. She stayed active in preaching when she could have retired because she realised that people needed to know Jesus. Her personal faith gave her a perspective that made her stand apart from others.

Corrie ten Boom was someone who stood firm and served Jesus Christ – her true ‘hiding place’ – faithfully in her time. May we do the same in ours.

For just $100 per month you can bring the gospel to 10,000 homes. Join us as media missionaries! GIVE NOW
VIEW COMMENTS
« Prayers For President Donald Trump And First Lady As They Test Positive For COVID-19 On Way To Recovery? Israel Sees Slight Drop In Positive COVID-19 Tests Results »