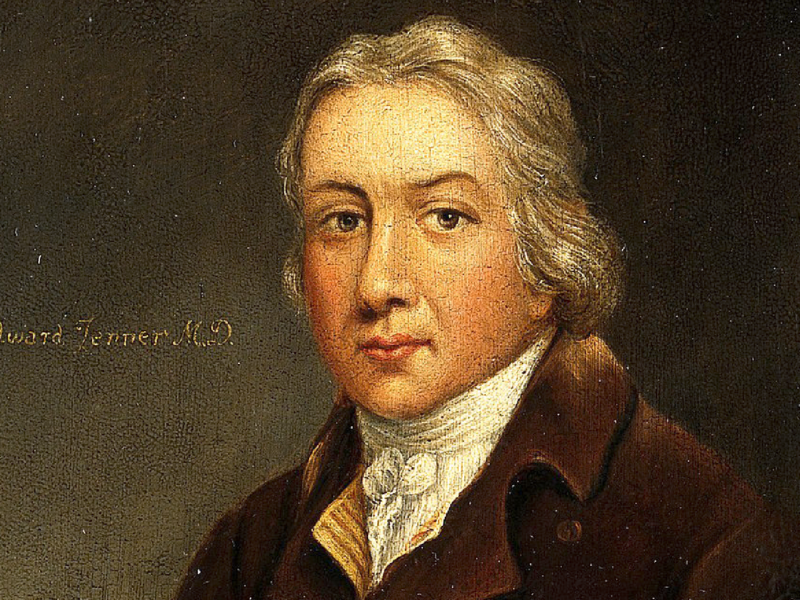 It has been said of Edward Jenner that ‘his work saved more lives than any other man on earth’. It’s an extraordinary claim for someone who spent his entire life as a country doctor, but it may well be true.

Edward Jenner was born in 1749 in Berkeley, Gloucestershire, England, the son of the local vicar. His family had a long tradition of sending people into the church, but the death of Jenner’s father left the family impoverished and forced the young man to take up another career. From an early age Jenner had a great interest in science and the natural world and was apprenticed to a doctor. Learning the trade, he went on to work in London where his skills both as a physician and a scientist were soon recognised. He was invited by Captain Cook to be part of the science team on his second voyage to Australasia. Jenner, however, had no love of either travel or London life and soon returned to his home village as its doctor.

Jenner’s reputation as a caring and wise doctor grew among his community but he continued to pursue his long-standing fascination with nature. He was particularly interested in birds and his careful studies of cuckoo behaviour gained him such respect in the British scientific community that he was elected to the prestigious Royal Society.

The great medical curse of the age was the killer disease smallpox. In Europe, around 400,000 people a year died from the disease. Typically, when smallpox swept through a village 20 to 50 per cent of those infected died. A third of the survivors of smallpox went blind and many more were scarred for life.

People were so desperate to avoid smallpox that they sought to be deliberately inoculated from sores of those who had a mild form of the disease in the hope that this would give them some immunity. It was a risky procedure with limited success: the great American preacher Jonathan Edwards died as a result of it. It was a disease without a cure.

In thinking about smallpox, Jenner pondered a dairymaid’s intriguing comment: ‘I shall never have smallpox for I have had cowpox.’ Cowpox was a mild infection of animals which could be caught by humans with little harmful effect. Jenner concluded that there must be a possibility that smallpox could be prevented by inoculating people with cowpox. Yet as a scientist he knew that to be of any worth, any experiments had to be conducted carefully. When an outbreak of cowpox occurred locally, Jenner deliberately inoculated a young stablehand with it. The boy suffered only mild effects and when, a few months later, he was inoculated with smallpox, he failed to catch the far more serious disease. Encouraged, Jenner persisted with more inoculations and in 1797 sent a short communication to the Royal Society describing his results. His paper was rejected on the grounds that it had only 13 samples. Disappointed but not deterred, Jenner went away and carried out more work, eventually publishing his results at his own expense.

Jenner called his new procedure vaccination after the Latin word for cow, vacca. Despite controversy, his method spread rapidly throughout Britain and was soon taken up across the world. Jenner refused to make money out of his discovery – he inoculated the poor for free – and in encouraging the careful use of the new technique he bankrupted himself.

There is very little to say about the rest of Jenner’s life. He continued as a doctor and consultant, kept up his interest in the natural world and died in 1823. His old adversary, smallpox, outlasted him but not for long. Increasingly confined to remote parts of the world, it was finally eradicated in 1980.

Despite the turbulence of the times in which Jenner lived – the Napoleonic wars were raging – his fame became enormous. He was soon considered one of the most famous men in Europe and honoured everywhere, even by Napoleon, who had his entire army vaccinated.

Edward Jenner was a committed Christian. He was typical of many believers in every age who demonstrate their faith through the way they live their lives. An amiable, quiet, warm-hearted Christian, ever ready with the appropriate Bible verse, Jenner was anxious that his discovery would be used as widely as possible. He was particularly concerned that praise should be directed not to him, but to the God who had made and used him.

I find many challenges in the life of Edward Jenner.

First, I’m challenged by what Jenner achieved. In Christian circles, it is still sometimes held that the highest calling that anyone can have is that of being a full-time minister of the gospel. Circumstances demanded that Jenner never made it as a preacher but it’s hard to imagine a life of greater value than his.

Third, I’m challenged by his determination. Jenner’s first efforts at publishing his results were rejected. Instead of giving up, he simply went back and got more data until his work was accepted. Vaccination then, as now, was controversial and Jenner had more than his fair share of criticism. Nevertheless, trusting in his knowledge, his studies and his God, he stood firm against his critics.

Finally, I’m challenged by Jenner’s immunity to fame. Here is a man who became quite literally a household name across the world, yet his celebrity status left him unchanged. Jenner remained to the end of his life a man who was gentle, humble and gracious.

So at a time when the word vaccination is widely heard, spare a thought for Edward Jenner, the man who started it all. A true hero of the faith.

For just $100 per month you can bring the gospel to 10,000 homes. Join us as media missionaries! GIVE NOW
VIEW COMMENTS
« Missing Woman For 2 Years Found Floating At Sea By Fisherman; Credits God For The Rescue Understanding The Reckless Grace Of God »