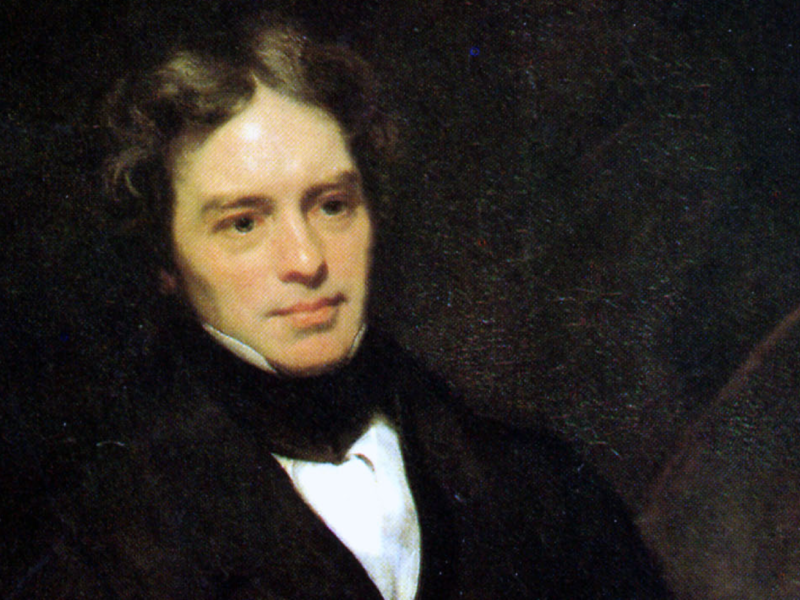 The extraordinary life of Michael Faraday, perhaps the greatest scientist of the nineteenth century, reads like one of Charles Dickens’ novels.

Faraday was born in 1791 into an impoverished family in what is now Southwark, London. His father was a blacksmith and Faraday’s education was basic. The family, however, was supported by their church; throughout his life Faraday kept up his involvement with his church and gave a clear testimony to a personal relationship with Christ.

At the age of 11, poverty forced Faraday into work. He began running errands for George Riebau, a French bookbinder, who, recognising Faraday’s potential, took him on as an apprentice. Faraday began to read and Riebau wisely directed him towards useful books. He soon became fascinated by science. The bookbinder encouraged Faraday, gave him space to conduct his own experiments and eventually enabled him to hear lectures by the world-famous chemist Humphry Davy.

Inspired by Davy’s talks, Faraday wrote to the chemist and soon became his assistant at the Royal Institution, a body that specialised in applied science. Davy found the young man remarkably useful and took him on an eighteen-month tour of Europe, visiting many of the great scientists of the time.

On his return to England, Faraday continued to help Davy but increasingly began to do his own experiments in chemistry and, later, physics. Faraday turned out to be a superb experimental scientist. He was imaginative and methodical and tried to test for himself every scientific claim he came across. He was a hard worker and rapidly published his discoveries, writing nearly 500 papers in his long career.

Step by step Faraday rose to the very highest levels of international science. He became the director of the Royal Institution, was awarded a doctorate by Oxford University and made a fellow of the prestigious Royal Society — indeed he was twice invited to become its president but refused because he wanted to continue his laboratory work. Despite his honours, Faraday remained humble, lived on a modest salary and refused a knighthood, preferring to be ‘plain Mr Faraday’. He did, however, accept an apartment at Hampton Court given to him by the monarch, along with a small pension.

Faraday worked hard – possibly too hard because eventually his health failed – but he was sustained by two things. The first was his marriage in 1821 to Sarah Barnard with whom he had a long and happy, if childless, partnership. The second was his deep Christian commitment and his church involvement: he was not only a faithful church member, elder and preacher, but also regularly involved in visiting the poor and sick.

Faraday’s achievement is even more remarkable when we consider that the odds were stacked against him. He remained something of an outsider in society; he was lower class and had almost no formal education. However, he was accepted not just because of his brilliance as a scientist but because of the way his gentle, humble manner won him friends.

In the early 1840s, Faraday’s health began to deteriorate. Typically, when it was proposed to him that he would be buried in Westminster Abbey along with monarchs and scientists such as Isaac Newton, he refused. He died in 1867 at Hampton Court.

In his prolific career Faraday’s studies covered a vast area. He has been referred to as the ‘Patron Saint of Electricity’ and much of today’s world relies on principles he first discovered: the dynamo, the transformer, the electric motor, electrolysis and so on, but Faraday’s expertise was much wider. He invented the process we use in refrigeration, recognised the potential of ether as an anaesthetic and discovered the important chemical benzene – the list of discoveries goes on.

Faraday’s ascent from being an absolute nobody to a very considerable somebody is definitely inspiring. I am particularly challenged by three things.

Faraday was committed to seeking truth. A particular Christian emphasis in Faraday’s thinking was the way that he saw the natural world as something created and governed by a God who had given rules which human beings could, and should, follow. Inspired by a vision that everything in nature was ultimately connected, he peered forward into the future, anticipating ideas that were to be developed by Einstein, who had a portrait of Faraday in his office to inspire him.

Faraday was committed to sharing truth. Scientists can be notoriously bad at communication but Faraday, doubtless remembering his own experience, was different and always anxious to publicise what was being done. He himself was a good communicator and full of enthusiasm. He arranged accessible public lectures, including some for children, a tradition continued today as the Royal Institution Christmas Lectures.

Faraday was committed to serving truth. There was no gap between what he believed and what he did. In his role as the nation’s ‘chief scientist’ Faraday served society: investigating mine explosions, working on better lighthouse lamps, preventing the corrosion of ships and raising issues about industrial and water pollution. Faraday didn’t just do good, he also resisted evil, refusing to develop chemical weapons for use in the Crimean War.

Michael Faraday’s life is full of towering achievements. To do all that he did, against the odds, and maintain his Christian witness is astonishing. You don’t have to be Einstein to find him an inspiration!

For just $100 per month you can bring the gospel to 10,000 homes. Join us as media missionaries! GIVE NOW
VIEW COMMENTS
« Israeli Researchers Find that Ozone is Very Effective in Disinfecting Coronavirus Secrets To Prevailing Through Pain, Suffering, And Disappointment »