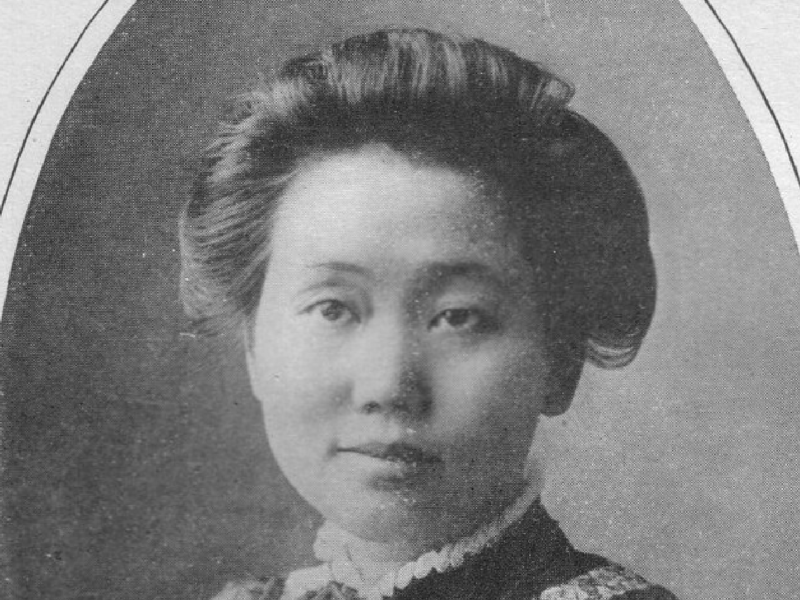 Shi Meiyu was born in Jiujiang, on the shores of China’s Yangtze River in 1873. Both her parents were first-generation Christians: her father a Methodist pastor and her mother principal of a Christian school. For millennia women had had a well-defined, second-class role in Chinese culture. Of the many injustice’s girls faced, the worst was that it was still the custom for a young girl’s feet to be bound, crushing the bones in order to produce small feet that were the hallmark of a superior social class. In a decision that foreshadowed their daughter’s own radical actions, her parents refused to do this.

Mocked for her unbound feet, Shi Meiyu grew up as an outsider and her father, impressed by a Western female doctor, decided that she should train in medicine. Taught in both Chinese and English, Shi Meiyu was sent to the United States in 1892 for professional medical training. Faced with a widespread inability to pronounce her name, Shi Meiyu adopted the name ‘Mary Stone’ and in 1896 she and a friend became the first Chinese women to graduate as Western-trained doctors.

Shi Meiyu returned to Jiujiang and almost immediately demonstrated her independence by politely rejecting a mission board’s offer of work in an American-run hospital. Still only 24, Shi Meiyu was confident that it was time for Chinese Christians to take the lead and with a colleague set up a clinic. It was a success and with American financial support she was soon able to open a 95-bed hospital.

Shi Meiyu spent nearly fifty years working in China. Despite the fact that her small stature meant that she had to sit on a stool to operate, she became a respected surgeon. She dispensed medicines and carried out tiring medical visits in the countryside, where she would often treat fifty patients in a day. Yet Shi Meiyu was far more than just a pioneering doctor and for years was not only the administrator of the hospital but created and ran training programmes for nurses. Her vision knew no limits and she was involved in setting up hospitals, training centres and schools across China, a nation almost the size of Europe.

Shi Meiyu became a well-known champion for a range of social causes. She did all she could to lift women out of their subordinate status, encouraging some to become doctors, campaigning against foot-binding (which was eventually outlawed) and letting her hospital and nursing school become a haven for abused women. She cared for the disabled, was concerned about orphans – adopting four with a friend – and was one of the founders of the Chinese Red Cross. She continued to maintain good links with the United States, where she was a popular speaker, and after the Second World War she retired there, dying in 1954 at the age of 81.

At the heart of this remarkable woman and her innumerable initiatives was a vibrant Christian faith. In the hospital, the day opened with worship – often led by Shi Meiyu – and she expected her nurses to be evangelists. As an increasing number of young Chinese doctors arrived, Shi Meiyu was able to step back from practising medicine to spend more time on her evangelistic and church work. She was an important figure in the Chinese church, where she is still honoured, and became the nation’s first ordained female pastor.

There is much in the life of Shi Meiyu that challenges and encourages me.

First, I see a godly passion. The world is divided into those who are driven and those who drift. Shi Meiyu was in the first category, seeing the spiritual and physical needs of an enormous nation and working tirelessly to meet those needs. It’s a great thing to dream dreams but it’s an even greater thing to work to make them happen. Do we have her passion and zeal? If not, why not?

Second, I see a godly wisdom. It would have been easy for Shi Meiyu to have burned herself out in the innumerable battles she faced as a doctor and administrator. But she knew her limits and, aware that she could not realise her vision for China alone, trained others in medicine, nursing and evangelism. Most importantly for the long term, she trained them to train others. Equally, Shi Meiyu didn’t just campaign for progress, she demonstrated by example that Chinese women were capable of the highest levels of skill, learning and administration. Shi Meiyu saw, too, that ultimately China could only be effectively evangelised by the Chinese themselves and had a vision for a truly indigenous church independent of foreign missions. That emphasis was to prove invaluable when the Communist government expelled foreign missionaries in 1949.

Third, I see a godly balance. During Shi Meiyu’s lifetime China underwent cultural and economic changes that in many Western countries had taken centuries. Living through such turbulent times she fought many battles as a reformer. It would have been easy for her extraordinary energies to have been so diverted but her prayerful relationship with Christ remained at the centre of all she was. She was never anything other than a Christian with a heart of Christ.

The Bible reminds us that any genuine living faith must be worked out in practice. In Shi Meiyu’s life we see an example of this on a grand scale: she impacted a vast nation for Christ. May the Lord raise up more Shi Meiyus for a time such as this.

For just $100 per month you can bring the gospel to 10,000 homes. Join us as media missionaries! GIVE NOW
VIEW COMMENTS
« Little Girl Sings Her Rendition Of ‘As The Deer’ And It’s Beautiful Christian Celebrity Couple Justin And Hailey Bieber Sits Down With Pastor Judah Smith »