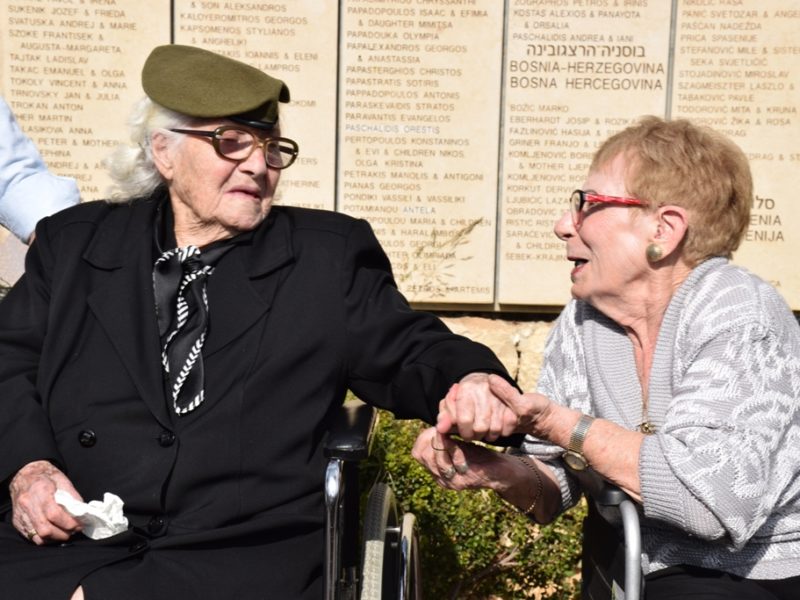 After almost eight decades, two Holocaust survivors now living in Israel were reunited on Sunday with their Greek rescuer in the Hall of Names at Yad Vashem, the World Holocaust Remembrance Center, in Jerusalem.

The emotional reunion, initiated by the US-based Jewish Foundation for the Righteous (JFR), took place in the presence of some 40 descendants of the survivors who are alive today because of the heroic actions taken 76 years ago.

Survivors in Jerusalem.  (née Mordechai) and Yossi Mor (né Mordechai), were reunited with Melpomeni Dina (née Gianopoulou), one of the people who helped save their lives during the Holocaust.

Siblings Sarah and Yossi were born in Veria, Greece, a small town with 600 Jewish residents, located near Thessaloniki.

For almost two years, Sarah and Yossi, together with their mother Miriam and their siblings Asher, Shmuel and Rachel, were given refuge from their Nazi persecutors and were provided for by Melpomeni Dina, along with her sisters, Efthimia and Bithleem, as well as members of the Axiopoulos family: Nikos, Petros and Polixeni Axiopoulos, Evlambia Tokatlido and Makrina Ananiadou.

Due to the heroism and sacrifice of both the Gianopoulou and Axiopoulos families, most of the immediate Mordechai family members survived the war.

Efthimia Gianopoulou, Melpomeni’s older sister, first met the Mordechai family while studying to become a seamstress with Mari. Since Efthimia was impoverished and orphaned at a young age, Mari did not charge her for the lessons. Efthimia grew close to the Mordechais and visited them regularly, even after they went into hiding aided by the Axiopoulos family.

After their hiding place was compromised, Efthimia arranged for them to move to her home in Veria, where she lived with her two younger sisters, 15-year-old Bithleem, and 14-year-old Melpomeni. There, in one room, they accommodated seven members of the Mordechai family.

The three sisters shared their food rations with the Mordechais and sheltered them despite the risk to their own lives. Since food supplies were scarce and very expensive, Bithleem and Melpomeni cultivated a piece of land they owned in a swamp near Yiannitsa, around 40 kilometers from Veria. They would return from working the land, carrying the provisions on their backs for all 10 people.

After Shmuel died at the age of six and the family’s hiding place was discovered by the authorities, the Gianopoulous helped the Mordechais flee to the Vermio mountains, continuing to provide for them until the end of the war.

On 12 April 1994, Yad Vashem recognized Melpomeni Dina as Righteous Among the Nations. Members of the Gianopoulou and Axiopoulos families were recognized a few years earlier in 1989.

“Though we have met many survivors and their rescuers over the years, I never cease to be amazed by the bravery of the thousands of non-Jewish rescuers, the Righteous Among the Nations, who risked their lives and often the lives of their families to save Jews from death during the Holocaust,” said JFR Executive Vice President Stanlee Stahl.

“This year, the reunion took place in Jerusalem at Yad Vashem, with living survivors, their children and grandchildren, all of whom are alive today thanks to the heroism of Melpomeni and her sisters, making the event all the more meaningful,” he added.

“We are eternally grateful for these Righteous Among the Nations, who acted courageously during World War II, and through our work, we hope to share their stories of bravery and compassion,” he said.

The JFR provides monthly financial assistance to more than 265 aged and needy rescuers living in 18 countries. Since its founding, the JFR has provided more than $40 million to the rescuers, paying a debt of gratitude on behalf of the Jewish people.

“Even 75 years after the end of World War II, Yad Vashem receives hundreds of requests each year to recognize non-Jews who risked their lives then to save Jews during the Holocaust,” Director of the Righteous Among the Nations Department Dr. Joel Zisenwine revealed.

“These rescuers are sparks of light during a period of darkness and devastation, and provide a source of inspiration to us all in today’s fractured society,” he stated.

To date, Yad Vashem has recognized over 27,000 Righteous Among the Nations, 355 of whom are from Greece.

For just $10 per month you can bring the gospel to 1,000 homes. Join us as media missionaries! GIVE NOW
VIEW COMMENTS
« Netanyahu: ‘We Have No Better Friends in the World than Our Christian Friends’ Rivlin: Israeli Political Plight Creates ‘Longing in the Air for the Role of a Prophet’ »