Not Might Nor Power But Holy Spirit | God TV
Articles 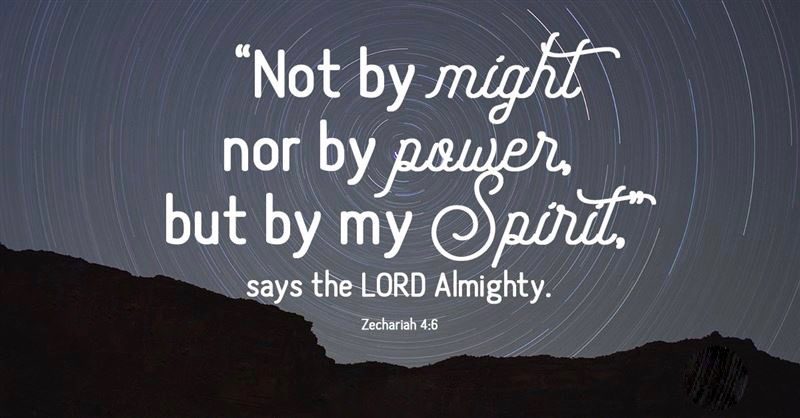 “It’s not by our prowess but it’s by Holy Spirit power and anointing upon our work that we will succeed in reaching this lost world for Christ.”

I could imagine Governor Zerubbabel sitting among the rubble of the ruins of Solomon’s temple on Mount Zion. He was one of those born under Babylonian captivity who had returned to the ruins of Jerusalem after Babylon fell to the Persians. Zerubbabel led the first wave of Jewish exiles to return to Jerusalem in 536 B.C. Perhaps he prayed, “Adonai, I am a simple man with none of the skills required to rebuild this grand temple to your glory. How am I to do this great task you’re asking of me? How will I restore your mighty temple?”

The Jews had turned from God’s Law and were worshipping useless idols. Through his prophets, God warned his people that, as a result, Jerusalem would fall. The Babylonians conquered Judah around 587 B.C. and took God’s people captive. For 70 years they would remain in exile. After this time, God would restore his people and call them to rebuild Jerusalem.

David was the first great anointed king of Israel; a man after God’s own heart. With great might, he successfully conquered his enemies and built Jerusalem, the City of David. David was a mighty warrior king. The Lord God promised David that his son, Solomon would build the first temple to his glory in Jerusalem. Shortly after Solomon came to the throne, he sought God for wisdom. The Lord was pleased with his request and granted the king great wisdom and wealth. As a result, Solomon became the wealthiest ruler of the known world. Rich, wise and powerful, he built the first temple to the Lord Almighty.

Shortly after Solomon died, the kingdom was divided – Israel to the north and Judah to the south. The temple was in Jerusalem, in Judah. Both nations eventually rebelled against God. Through Isaiah, God warned Israel that it would fall to the Assyrians. This occurred in 722 B.C. Through Jeremiah, God warned Judah that it would be taken by Babylon. In 586 B.C. Nebuchadnezzar overthrew Jerusalem and took the Jews captive for 70 years. The North (Israel) was never restored but Judah was restored from 538 to 432 B.C. when Persia overthrew Babylon.

When Babylon fell, Cyrus the king of Persia issued a decree that the Jews could return to their homeland. Zerubbabel was appointed first governor under the king of Persia. He was a child of captivity whose name means, the one sown of Babylon. Zerubbabel led the first return of exiles to Jerusalem. He was a humble man who faced the greatest mission of his life. I believe Zerubbabel lacked the confidence and skills required to undertake such a great task. He had neither the military might of David or the monitory power of Solomon, yet God called him to rebuild Jerusalem and its temple.

What a dilemma Governor Zerubbabel faced as he sat among the ruins of the temple in Jerusalem that day. He’d set his heart on leading his people to seek the face of the Lord their God once again but lacked the confidence to rebuild God’s temple. Perhaps, with his head in his hands, Zerubbabel sighs, “I’m not a mighty warrior like King David, or powerfully wealthy like King Solomon, who originally built this temple.” In the still of midday Jerusalem sun, he hears the voice of the prophet behind him, “Not by might, nor by power, but by my Spirit, says the Lord of hosts.”

THE ANOINTING BREAKS THE YOKE

Zerubbabel did not have the natural skills set or talents to undertake such a great mission as to rebuild Solomon’s temple. A decedent of king David, Zerubbabel possessed neither the might of his great ancestor nor the power of David’s son, Solomon to complete this task. Zerubbabel was an average guy, called by God to a great work.

In Isaiah 10:27 we read that the anointing breaks the yoke of oppression and ineptitude. As Christians, we are all called to all the world; called to make disciples of all nations, baptising them in the name of the Father, the Son and the Holy Spirit and teaching them to follow Christ. This auspicious mission plays out in all walks of life. What a task, what a great assignment for an average person like you or me.

Indeed, there have been many great men and women who have undertaken this mission with much might and plentiful power. However, God’s word to you and me today is this: it’s not by the reputation of others, neither is it by our natural skills or talents, that we will undertake and succeed in such a great task. It’s not by our prowess but it’s by his Holy Spirit power and anointing upon our work that we will succeed in reaching this lost world for Christ, under the current world moral climate. Only the Holy Spirit is our source and resource. Only the Holy Spirit is our comforter, companion, counsellor and helper. Only he is our might and power.

For just $100 per month you can bring the gospel to 10,000 homes. Join us as media missionaries! GIVE NOW
VIEW COMMENTS
« We Are The Bride of Christ. Netanyahu in Paris Warns Antisemitism Doesn’t End With Jews »