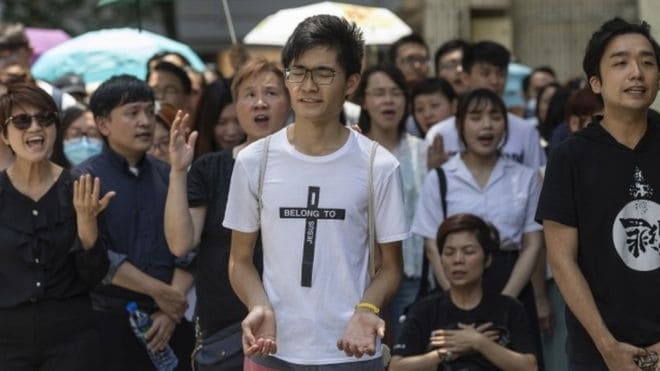 1.7 million people came out for Sunday’s pro-democracy demonstration in Hong Kong, marking eleven weeks of protests. Among the demonstrators were Hong Kong Christians.

The protests in Hong Kong began over an extradition bill proposed by the government of Hong Kong that would allow local authorities to extradite people back to China and Taiwan. The need for democratic reform has led to record breaking marches.

“From toddlers to the elderly, protesters turned out to join a massive rally. Entire families were seen dressed in black getting soaked together when the heavens opened and driving rain struck the city. These demonstrations wanted to draw again on a wide pool of public support after shocking images of escalating violence here caused many to rethink the direction of the pro-democracy push.”

READ: Why are there protests in Hong Kong? All the context you need.

Many of the demonstrators turning out are Christians and Catholics hoping to be a voice of justice, compassion, and peace. The democracy they’re calling for protects Hong Kong Christians against the anti-Christian mainland China.

“One explanation for the church’s active involvement is that the amendments to the extradition bill – which would allow the city to transfer fugitives to other jurisdictions including mainland China – potentially threaten religious freedom in Hong Kong. ‘It hangs above our neck like an invisible knife. Who wouldn’t be afraid?'” writes Rachel Cheung of The Week In Asia, SCMP.

“The Christin Hymn ‘Sing Hallelujah to the Lord’ has become the unofficial protest anthem for both believers and non-believers.”

There is no end in sight for the protests but while there are songs of praise being sang, the Spirit of the Lord is among the millions.

How you can pray for Hong Kong:

For just $100 per month you can bring the gospel to 10,000 homes. Join us as media missionaries! GIVE NOW
VIEW COMMENTS
« Weilding The Gifts We’ve Been Given Trump Will Unveil Peace Plan After Israeli Elections »