BREAKING
Maverick City Music Gives God The Glory During The 2023 GRAMMY Awards...
Ten-Year-Old Reporter Praying Over NFL Pro Bowl Quarterback Goes Viral
Soccer Star Christian Atsu Found Alive Under Rubble Following Deadly Turkey Earthquake
Home Faith How Do I Honor My Parents if They Are Mocking Me For My Faith?

How Do I Honor My Parents if They Are Mocking Me For My Faith? 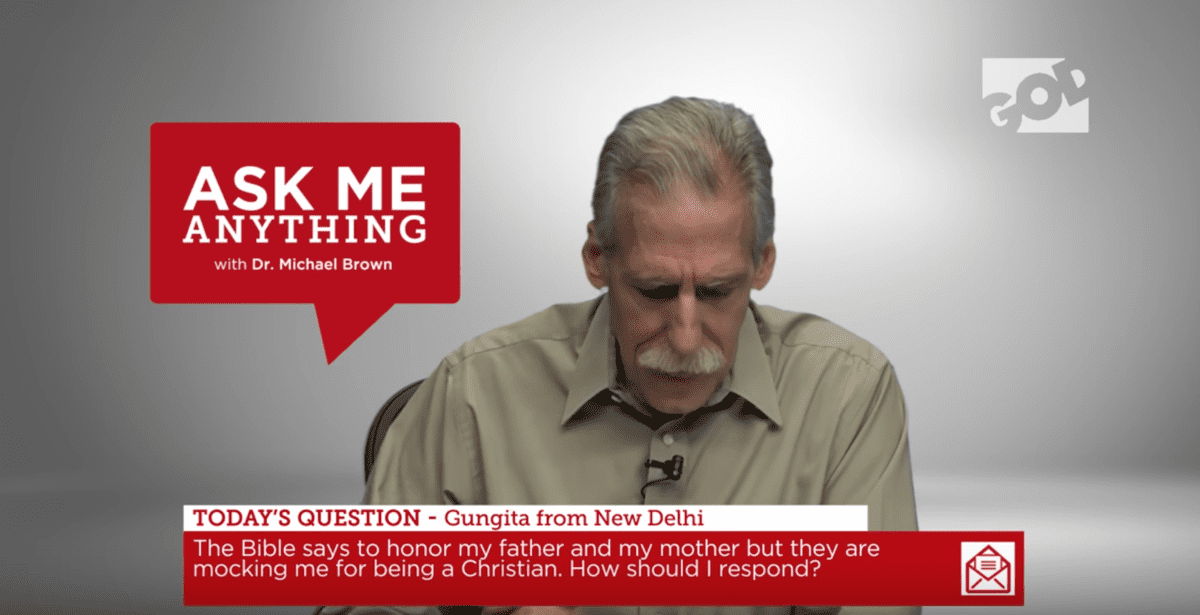 Ask Me Anything with Dr. Michael Brown: Honor Your Mother & Father?

This week on GOD TV’s Ask Me Anything, Dr. Michael Brown answers a tough, controversial question from a young woman named Gungita from New Delhi, India: “The Bible says to honor my father and mother. But they are mocking me for being a Christian. How should I respond?” While it might be tempting to skirt around a question with such profound implications, Dr. Brown tackles this issue head-on.

India: A Culture of Obedience

Keep in mind that Gungita is likely struggling with not only the Biblical imperative to respect her elders, but also her culture’s traditions of doing so. India, like other countries in the East, treasures the wisdom of the elderly, and young people are expected to submit to their authority.

But which comes first: the need to follow Christ or the cultural and Biblical commandment to honor parents? Dr. Brown believes you can do both. Why?

Submission is absolute. Obedience is conditional.

Dr. Brown quotes Chinese Christian leader Nee, who wrote in his book Spiritual Authority, “Submission is a matter of attitude, while obedience is a matter of conduct.” In his own life, Nee contended with an anti-Christian, communist Chinese government, and he did so by submitting to it with his attitude but obeying God with his actions.

As a Christian and Indian, Gungita should submit to the authority of her parents, but she should not obey any demands that would impede her Christian faith.

Dr. Brown astutely advises Gungita to tell her parents, “I honor you, I respect you, and I love you, but I have to obey God. Jesus is my Lord.” If they proceed to kick her out of the house, which is a common problem for young Christians in anti-Christian societies, she should leave and trust that God will provide.

Because there are so many conflicting demands on us, we can only unconditionally obey one King–God. We can and should submit to human authorities, but only obey them when doing so does not conflict with God’s commands.

We see Nee’s principle and Dr. Brown’s advice echoed in the life of Jesus. Jesus tells his followers to “render to Caesar the things that are Caesar’s, and to God the things that are God’s” (Mark 12:17). In short, submit to human authorities, but when it comes to actions that affect the heart and soul, obey God.

But choosing to disobey parents is a little more personal than choosing to disobey the government. What does Jesus say about that? In Luke 14:26, Jesus teaches, “If anyone comes to me and does not hate his own father and mother and wife and children and brothers and sisters, yes, and even his own life, he cannot be my disciple.”

Wow! Did Jesus really advise us to hate? Well, not exactly. According to some Biblical scholars, Jesus sows seeds of division within families (and even within the self) to teach that devotion to God must be first and foremost in our lives.

Not only that, but Jesus acts on his own words in Luke 8:19-21. When his mother and brothers came to see him, he responded, “My mother and brothers are those who hear God’s word and put it into practice.” Likely, Jesus’s intention was not to be cold toward his own family, but rather to emphasize the unity within the Christian community.

So we learn from Jesus that devotion to God must come first in our lives. He also demonstrated that God’s family of believers is even more important than our own blood ties. In essence, submit to parents and authorities, but obey God.

Ultimately, we are God’s children, and we must first and foremost obey God. Whatever the consequences, the family of believers must stand united. Perhaps the idea of having brothers and sisters in Christ is comforting to the young woman in India struggling with family issues.

Send Us Your Questions

If you need moral sanity or spiritual clarity, send your questions to Dr. Michael Brown via [email protected], tweet with #AMADRBROWN, or Facebook.