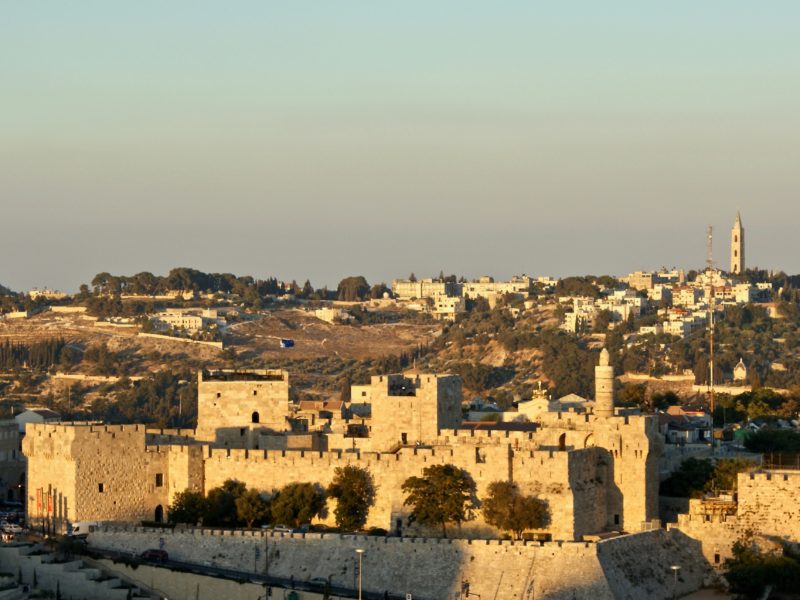 A rare bronze oil lamp, shaped like a grotesque face cut in half and meant for good fortune, was recently discovered in excavations conducted by the Israel Antiquities Authority (IAA) in the City of David in Jerusalem’s Old City.

IAA archaeologists Ari Levy and Dr. Yuval Baruch believe that the lamp, which was discovered in the foundations of a building built upon the pilgrimage road leading up to the Temple Mount, was intentionally deposited to bring good fortune to the building’s residents.

“The offering of this lamp may attest to the importance of the building, which may have been linked to the protection of the Siloach Pool, the city’s primary water source.”

This special bronze lamp is believed to have been deliberately buried in the foundations of the building, dating to the Roman Period, following the destruction of Jerusalem and the Second Temple in 70 CE.

In the opinion of the site’s archeologists, the lamp was a foundation deposit, a ritual burial of an offering in the foundations of a building.

“Foundation deposits were prevalent in the ancient world, and were intended for luck, and to ensure the continued existence of the building and its occupants, and they were usually buried under the floors of buildings or foundations,” explained Baruch and Levy.

The artifact, half of a lamp, was poured into a sculpted mold that was shaped like half of a face of a bearded man with a grotesque appearance. The tip of the lamp is shaped like a crescent moon, and the handle is shaped like the Acanthus plant. The decoration that appears on the lamp is reminiscent of a common Roman artistic motif, similar to a theatrical mask.

“This lamp is a very unique find, and as far as we know, the first of its kind discovered in Israel. The uniqueness of the current object is that it is only half a face,” they said.

Researchers are debating what this means. It may have been simply a practical matter. The lamp may have been attached to a flat object or wall, serving as a wall lamp, but the possibility that it was an object used in some sort of ceremonial ritual should not be ruled out.

Levy noted that the building where the lamp was discovered was built directly on top of the Pilgrimage Road right after the end of the Second Temple period.

“The construction of such a massive structure in the period after the destruction of Jewish Jerusalem demonstrates the importance of the area even after the destruction of the Second Temple. It is possible that the importance of the building, and the need to bless its activity with luck by burying a foundation deposit, was due to its proximity to the Siloach Pool, which was also used in the Roman period as the central source of water within the city,” he offered.

The bronze lamp was handed over for treatment and preservation in the IAA’s metal laboratory. During the treatment, another exciting discovery was made – the lamp’s wick, which was unusually preserved.

The wick, which is a very rare find, was submitted for examination by Dr. Naama Sukenik, curator of organic materials at the IAA. Upon microscopic examination, Sukenik identified that it was a wick made of flax. Future stages of research will try and identify any oil residue left on the wick, which will help determine whether the lamp was used and if so, what oil was used to light it.

Baruch said that “decorated bronze oil lamps were discovered throughout the Roman Empire. For the most part, such oil lamps stood on stylish candelabras or were hung on a chain. Collections around the world contain thousands of these bronze lamps, many of which were made in intricate shapes, indicating the artistic freedom that Roman metal artists possessed.”

For just $100 per month you can bring the gospel to 10,000 homes. Join us as media missionaries! GIVE NOW
VIEW COMMENTS
« God’s Word For You Today: God Is The God Of Everyday Jews Have Prayed The Shema For Thousands Of Years; What Is Shema? »