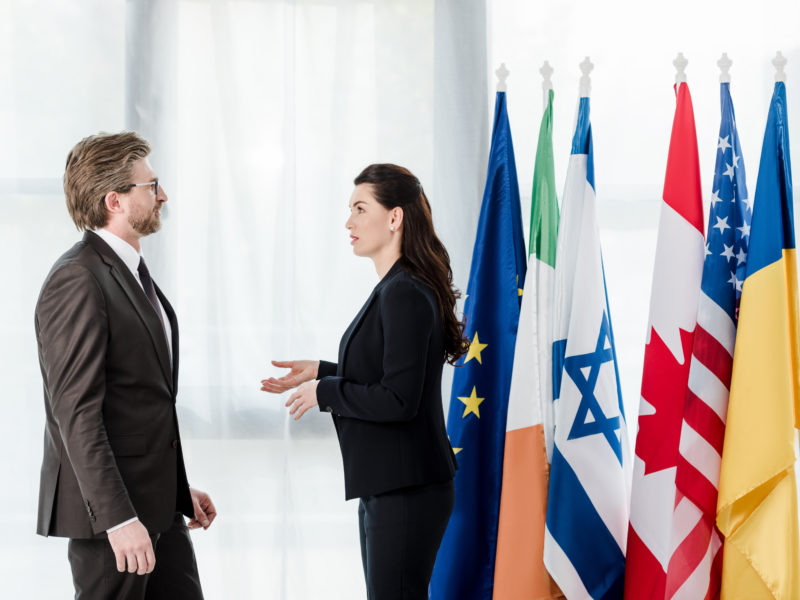 The Jewish Agency for Israel and The Jewish Federation of Greater Washington announced Tuesday their collaboration to bring former Member of Knesset Gadeer Kamal-Mreeh, the first female Druze member of Israel’s legislature, to Washington, DC as a senior Israeli emissary.

Kamal-Mreeh will be the first Druze senior to represent The Jewish Agency, joining the organization’s team of more than 2,000 shlichim (emissaries) stationed in over 60 countries, and the 10 shlichim already working in the Greater Washington region. These representatives work within local communities to strengthen connections to Israel and facilitate Jewish social activism.

“Gadeer Kamal-Mreeh’s personal and professional journey makes her a powerful embodiment of Israeli society’s diversity and complexity. We are thrilled that this unprecedented appointment will bring greater awareness regarding that diverse landscape to the United States as part of our efforts to strengthen understanding of Israel worldwide,” said Amira Ahronoviz, The Jewish Agency’s Director General and CEO.

“This decision was made with the enthusiastic support of Isaac Herzog, our outgoing Chairman of the Executive and the State of Israel’s president-elect. This landmark step for The Jewish Agency has been in the works for quite some time, and we are delighted to see it happen through our strong partnership with The Jewish Federation of Greater Washington,” she said.

By representing Israel in DC, arguably the most impactful hub for the intersection of local, national, and international issues prioritized by American Jewry, Kamal-Mreeh will balance national and local responsibilities to forge meaningful connections between Israel and world Jewry.

Nationally, Kamal-Mreeh’s primary goal will be to bring her unique perspective to the discussion about Israel in North America. Along with The Jewish Agency’s network of Israel Campus Fellows, in cooperation with Hillel International, Kamal-Mreeh will help train and provide support to campus advocates. With a specific focus on young Jews between the ages of 18-35, Kamal-Mreeh will also be tasked with creating and deepening communal connections across synagogues, Jewish Community Centers (JCCs), Jewish Federations and other American institutions, as well as The Jewish Federations of North America (JFNA).

“An essential part of Israel’s vibrancy is in the diverse populations who call the country home. We are honored to welcome Gadeer Kamal-Mreeh to Greater Washington, where our own vibrant community will benefit from her expertise, background and ability to deepen our connections with Israel and Israelis,” said Gil Preuss, CEO of The Jewish Federation of Greater Washington. “We are proud to support the continued innovation of the shlichut program by bringing new voices like Kamal-Mreeh’s to our community, and to further strengthen our long-standing partnership with The Jewish Agency through launching this initiative.”

Kamal-Mreeh has a degree from Bar Ilan University in Medical Imaging and Social Sciences and a master’s degree with honors in International Relations from Haifa University. She attended the Reshet School for TV Professions in Israel, and in 2011 began working for the Israeli Broadcasting Corporation, where she hosted a program in Arabic focusing on the social and cultural issues concerning Arab youth in Israel. In 2015, Kamal-Mreeh was selected to host the Israeli Broadcasting Corporation’s daily newscast in Arabic, and in 2017 she began anchoring its main (Hebrew) Saturday evening newscast, as well as a nightly newscast.

Kamal-Mreeh became a Member of Knesset in April 2019, where she served until April 2021. During her tenure, she chaired the Israel-Switzerland parliamentary friendship group and co-chaired the Israel-Germany friendship group. She was a member of the Interior and Environment Committee, the Advancement of Women’s Status and Gender Equality Committee, and of the special committee for fighting crime within the Arab sector. She also chaired the Caucus for Planning, Zoning and Industrial Areas, and the Caucus for the Advancement of Druze Women.

“I’m proud and excited to be a partner in bringing about this precedent-setting step which will enable another Israeli voice to be heard, conveying the multifaceted reality of Israel to both Jewish and non-Jewish audiences throughout North America,” said incoming Jewish Agency shlicha Gadeer Kamal-Mreeh. “I believe the time has come for all segments of Israeli society to be active partners in shaping global consciousness and that my unique identity as a woman from the Druze community will greatly contribute to my service – resulting in meaningful and innovative activities that will challenge and change perceptions. In the name of pluralism and diversity, we will work to connect, bridge and emphasize what we have in common, for our country and for our future.”

For just $100 per month you can bring the gospel to 10,000 homes. Join us as media missionaries! GIVE NOW
VIEW COMMENTS
« God’s Word For You Today: Listen To The Word Of God Heavy Conversation About Racism: How Is God Dealing With The Church Today? »