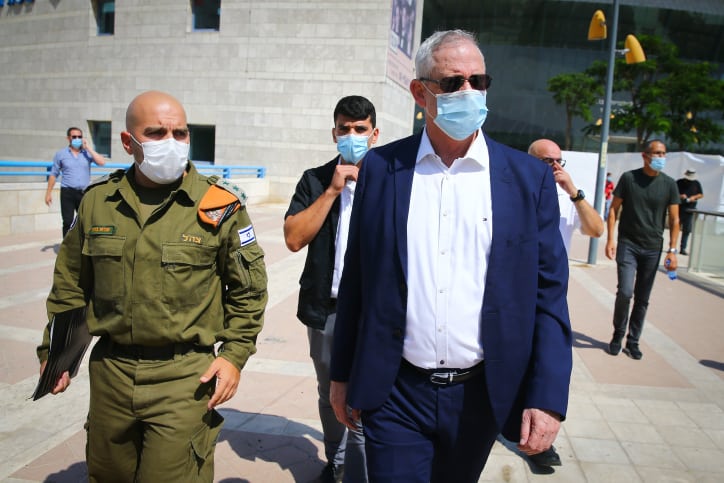 The talks were about “ways to leverage regional opportunity while confronting forces undermining stability,” Gantz stated after the meetings.

“The US is an anchor of regional stability and our countries are mutually committed to deepening cooperation, while protecting Israel’s military edge–critical to regional security,” he added.

One of the focuses of Gantz’s meetings was maintaining Israel’s qualitative military edge (QME) in the Middle East after the US has said it is ready to sell F-35 stealth fighters to the United Arab Emirates after it signed a peace agreement with Israel.

Israel is currently the only military to obtain the advanced fighters. A sale of the jets to another country can be perceived as a hindrance to Israel’s QME.

Israel can expect the procurement of other advanced systems to maintain its QME in the Middle East.

Esper “promised” Gantz that the US would maintain Israel’s qualitative edge in the Middle East.

Esper stressed that Israel is America’s most important strategic partner in the Middle East. “Our partnership is built over generations based on shared values, shared interests and shared concerns,” Esper said.

“I do want to say upfront for everyone, that a cornerstone of our defense relationship is preserving Israel’s qualitative military edge in the region. The United States is committed to that, and the Department of Defense is committed to that imperative,” he said.

In his meeting with NSA O’Brien, Gantz emphasized that the defense system in Israel “supports and appreciates” the pressure policy that the US is leading against Iran on the international front, and “in close cooperation with Israel on the issue.”

He also underscored that Israel “will continue to act in the face of Iranian establishment in Syria and the Middle East, and that Iranian aggression has not ceased during this period.”

Iran’s military build-up in Syria remains a red line for Israel. The Israeli Air Force has carried out thousands of attacks to thwart the Iranian entrenchment in the war-torn country.

For just $100 per month you can bring the gospel to 10,000 homes. Join us as media missionaries! GIVE NOW
VIEW COMMENTS
« Compassionate Couple Helped Homeless Man Reunite With His Family After 20 Years Israel Joins East Mediterranean Gas Forum, Will Sell $30 B. In Gas To Egypt, Jordan »