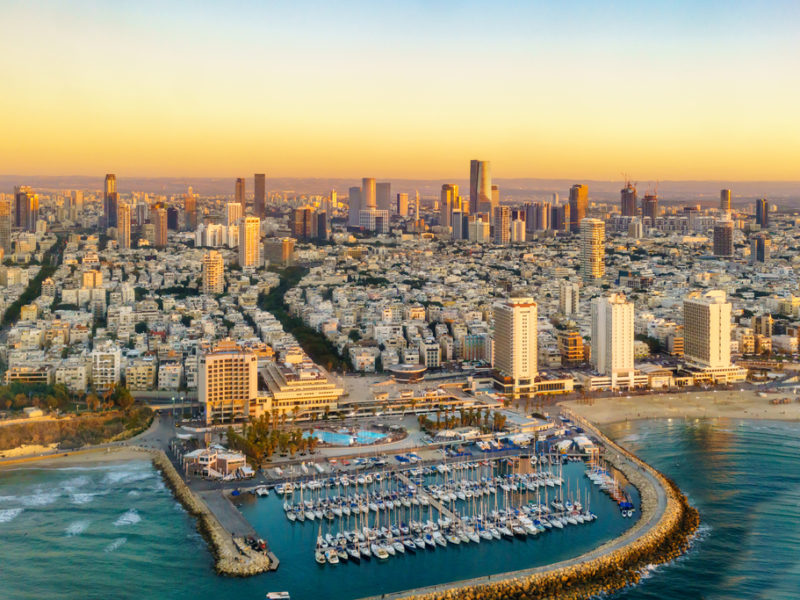 In 1909, Independence Hall Tel Aviv was the unrealized dream of Meir Dizengoff. He gained inspiration from the book, Altneuland written by Theodor Herzl. It was based on the vision of Israel returning to its homeland. He, along with 65 other families, took part in a lottery for plots of land around the area. He and his wife obtained one of the plots. They built upon the land, and it grew into one of the most prominent cities in the world.

Meir Dizengoff lived from 1861-1936. After an eventful youth, he became involved in the Habbit Zion movement, a pre-Zionist movement that advocated the revitalization of Jewish life in their land. In the 1880s he went to school to study chemical engineering, specializing in glass production. He worked this profession until 1896 when Eretz Yisrael production failed. In 1897 he returned to Odessa and worked a glass factory there. He also began his involvement with the Zionist Movement.

Meir returned to Eretz Yisrael and founded an association to obtain land in the new Jewish quarter. He and his wife, Zina, won plot number 64. The Ahuzat Bayit Company, the name of the association, began developing a neighborhood, calling it Ahuzat Bayit. The neighborhood expanded rapidly. In 1910 the area was renamed Tel Aviv.

Tel Aviv derives its name from the book that inspired Meir Dizengoff, Altneuland. It is a loose translation from German to Hebrew. The direct translation is Old-New Land. The Hebrew translation uses some metaphoric aspects. Therefore, Tel Aviv translates to Mound of Spring.

The Tel Aviv neighborhood continued to grow and eventually became a city in 1921. Meir Dizengoff became its first mayor. Through Meir’s efforts, Tel Aviv began building its first port in the 20s, and builders completed it in 1936, just before his death. He also envisioned plans for an airport; his successor completed that project.

Tel Aviv grew in population over the next decade, primarily due to the return of escaped German Jews during World War II. By 1948 the city’s population grew to 200,000.

In 1930, Meir’s wife, Zina, passed away. Meir then donated his home to Tel Aviv with instructions of creating a museum to the memory and history of the city. After several expansions, this home became Tel Aviv Art Museum.

In 1948, after the conclusion of WWII and the Israeli-Palestinian conflict, David Ben Gurion, head of the World Zionist movement, read the Israeli Declaration of Independence in the hall of the Tel Aviv Art Museum. The meeting included The People’s Council and The People’s Executive. Ben Gurion was inaugurated as the first Prime Minister of Israel.

The Tel Aviv Art Museum continued to expand. It was relocated to a larger facility in 1971 and renamed Heichal Haatzmaut Museum. Then on the 30th anniversary of Israel’s declaration of independence, the hall where the document was signed was inaugurated as Independence Hall Tel Aviv and opened to the public.

Independence Hall Tel Aviv houses some of Israel’s cultural and historical documents surrounding the signing of their declaration of independence. Most items are original. Items include photos, documents, as well as the recording of the ceremony.

If you have plans on visiting the historic location of Independence Hall Tel Aviv, you will have to wait a couple more years. In September of 2018 Independence Hall Tel Aviv closed its doors to undergo extensive restoration. The project will last two to three years. However, they have created a visitor’s center in the nearby Shalom-Meir Tower building on the first floor. The Visitors Center`s program focuses on the Declaration of Independence and its values, the events surrounding the founding of the State, and the establishment of the city of Tel Aviv.

In addition to the Visitor’s Center, Tel Aviv has a tour visitors can take. It was inaugurated on the 70th anniversary of the state of Israel. The Independence Hall Tel Aviv tour bears the name: Independence Trail. It is a one-kilometer tourist attraction that links ten historical sites. It is easy to follow. There is a golden brick trail that guides the tourist, and visitors obtain information through their mobile device and is free to the public.

For just $100 per month you can bring the gospel to 10,000 homes. Join us as media missionaries! GIVE NOW
VIEW COMMENTS
« 3 Millennia-Old Tabernacle-Era Findings Uncovered in Ancient Shiloh Reaching the Lost through the Messianic Jewish Bible Institute »