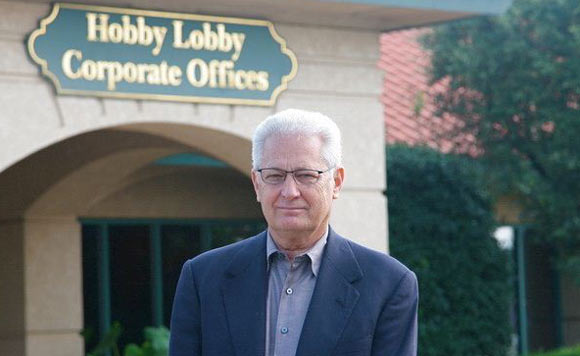 David Green is an American businessman and the founder of Hobby Lobby, a highly successful chain of arts and crafts stores. He comes from a long line of preachers and says he’s built his business squarely on the Bible. “We’re Christians and we run our business on Christian principles,” he says.

According to Wikipedia, David who was born in 1941, lives in Oklahoma City with his wife, Barbara. They have three children. Two work for the business. Their son Steve is the president of Hobby Lobby and their daughter, Darsee is the company’s creative director.

Their son, Mart is also the founder of a Christian business, Mardel Christian and Educational Supply and Every Tribe Entertainment. The family is also the financial backer of Museum of The Bible and Steve is the museum’s president.

From ‘rags to riches’

In 1970, while a store manager David borrowed just $600 to start a home business, Greco Products which turned out to be a runaway success. From his garage, he assembled and sold tiny picture frames which were highly popular at the time.  After doing this part-time for two years, David and his wife were able to open their own shop in Oklahoma City, the first Hobby Lobby store!

Five years later he was able to leave his job and open a second store with 6,000 square feet of space. From there the business just grew and grew. It now has over 800 stories with some 37,500 employees.

As a devout Christian, the Hobby Lobby founder is not afraid to make a stand for what he believes.  In 2014 he won a Supreme Court case that exempted “closely held” companies with strong religious beliefs from providing employees the morning-after pill.

Real-time net worth is $7.6 billion

As of April 14, 2019, Davids real-time net worth is said to be $7.6 billion according to Forbes magazine. Though close to 80 David still serves as Hobby Lobby’s CEO and goes to work six days a week. He and his family spent $500 million on the Museum of the Bible, which opened in Washington, DC in 2017.

In the video below, David is interviewed on Life Today. He speaks about his unique approach to business and what does it look like to be in full-time ministry and business at the same time.

“We are an arts and crafts store, and I think God calls us to be the best we can and then use our influence however we can and to run our company in such a way that is pleasing to the Lord. The way you treat your people, how you use your finances, all those things, God will be pleased with.”

David honors God with his life and with his business. He considers it as a ministry where he can influence people for God. From spending thousands each year to advertise the Gospel in newspapers during Christmas and Easter;  to playing Christian music in his stores; closing on Sundays and altogether operating his business according to Biblical principles. There’s no doubt why God made him a billionaire!

Read also: Own a Business? Here’s How You Can Use Your Business For Missions

For just $100 per month you can bring the gospel to 10,000 homes. Join us as media missionaries! GIVE NOW
VIEW COMMENTS
« Are You The Prayer Warrior The Lord Has Been Looking For? This 9-Year-Old Girl’s Note May Be Just What You Need To Hear Today! »