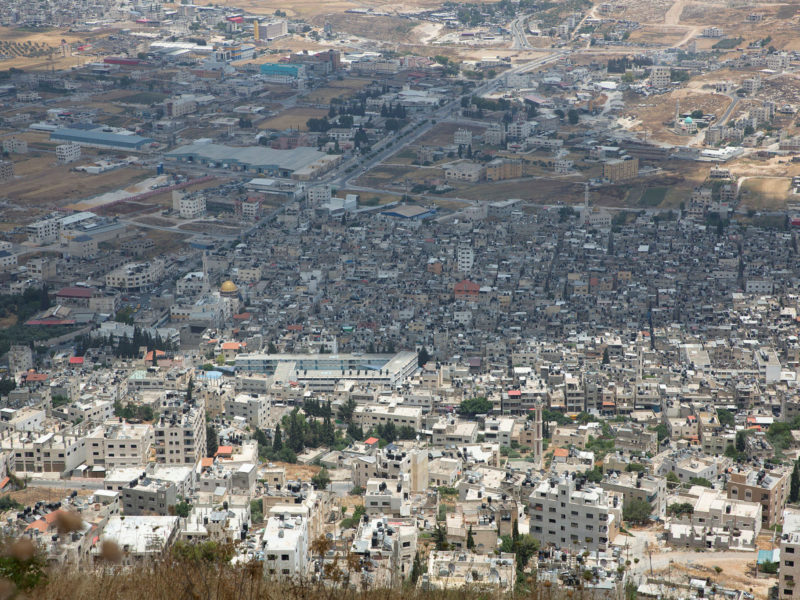 The municipality of Asira ash-Shamaliya, north of Shechem (Nablus), is probing the possibility of declaring the altar of Joshua Ben-Nun, on Mount Ebal, a Palestinian heritage site.

Engineers from the municipality and Shechem district have recently toured the site, equipped with plans and maps.

The Palestinian Authority’s (PA) Governor of Shechem Ibrahim Ramadan, accompanied by a delegation from the PA’s Ministry of Tourism and Antiquities, took part in a tour of the site in July, claiming the site is “threatened by the occupation and settlers.”

The mayor of Asira ash-Shamaliya Hazzem Yassin stated in an interview with TPS that he is “under no obligation to comment on city plans and certainly not on the site, which the Jews took ownership of, although they have no proof of it being a Jewish site.”

The Book of Joshua describes how Joshua Ben-Nun, the Israelite leader, built an altar on Mount Ebal, acting on instructions from Moses, after the Israelites had crossed into the Land of Israel.

Haifa University archaeologist Adam Zertal has identified the remains of an altar found at the site as the one described in the Bible, where Joshua allotted the new land among the 12 tribes.

“For us, the area of the altar, like the rest of the town, is within Area B, under Palestinian civil responsibility. Therefore, I will not deny nor confirm the allegations of turning the site into a developed site,” Yassin added.

However, Yassin said it makes no sense to move such a massive site from its location.

While Yassin has denied taking any action, it seems that preparations for work on the site are in full swing. In July, the municipality called on the public to join and assist in the activities of the ” Committee of the Preservation of Heritage Sites” in the village.

The Committee was established a few months ago and operates throughout the mountains north of Nablus.

The PA views the site as “a threatened area,” as do anti-settlement organizations, who are active in the area.

The Palestinian activity is being conducted as part of the “Martyr Ziad Abu Ein ” campaign, named after the Palestinian minister who died after one of the Arab riots in the Shiloh region.

The campaign at the Mount Ebal site was initiated by the municipality and the Fatah movement and was also attended by former Nablus Governor Akram Rajoub.

In January, the municipality planted olive trees near of the site, in response to the preparations made for a road that will make it easier for visitors to reach the site, an initiative of Israeli Agriculture Minister Uri Ariel. A youth delegation came to the village to assist in the planting operation at the “Burnat site,” as the Palestinians call it.

A month earlier, in December, a planting operation was carried out by Fatah activists, BDS officials and the Anti-Settlement Committee – all sponsored by the Nablus governor and PA officials. The Minister for Settlement Affairs in the PA Walid Asaf also participated in the campaign and attended meetings on the Ebal site.

Boaz Haetzni, a member of the Samaria Regional Council, told TPS that the PA plans are a provocation against Israel, Jews and Christians around the world, as it is a Jewish and Biblical heritage site. He cautioned that it appears that the PA, which has recently announced it does not recognize the division of the land into the areas A B and C, has begun to act accordingly.