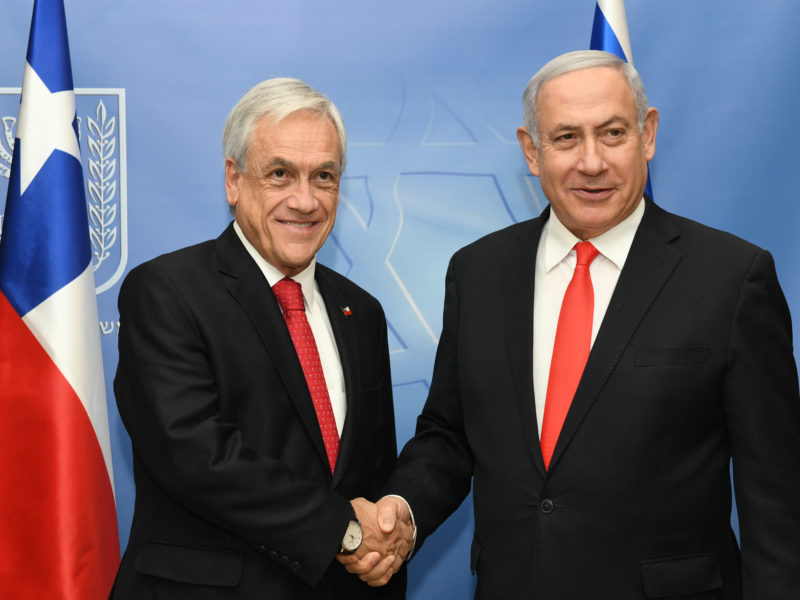 Israel and Chile on Wednesday signed a series of agreements that further boosted the economic ties between the two countries.

Piñera, who is in Israel for the second time, is on an official three-day visit to the Jewish state.

The two countries signed a Memorandum of Understanding (MOU) on a scientific cooperation program between Israel’s Science Ministry and the Chilean National Authority for Scientific and Technological Research.

The two sides also signed an aviation services agreement between the governments and a declaration of intent on health and medical cooperation between the two countries’ health ministries.

Another five agreements have already been signed during Piñera’s current visit.

Netanyahu, in his remarks to the press, noted that “Israel and Chile have a lot in common.”

“We share values of democracy and human rights. We share a belief in market economies and both of us have done a few things to promote these values in our respective countries. We believe in entrepreneurship. We believe in creativity. We have relatively small, not so small, but relatively small, very vibrant economies. It’s recognized by the countries in Latin America, Chile’s capacity in this regard just as the countries of the Middle East and the world recognize Israel’s capacities as an innovation nation,” he stated.

“We’ve achieved a lot separately, but I believe that we can achieve a lot more together,” he said.

For just $100 per month you can bring the gospel to 10,000 homes. Join us as media missionaries! GIVE NOW
VIEW COMMENTS
« WATCH: National Security Advisers of the US, Russia, and Israel Meet in Jerusalem African Dream Comes True For Youth Choir From South Africa As They Get A Standing Ovation On AGT »