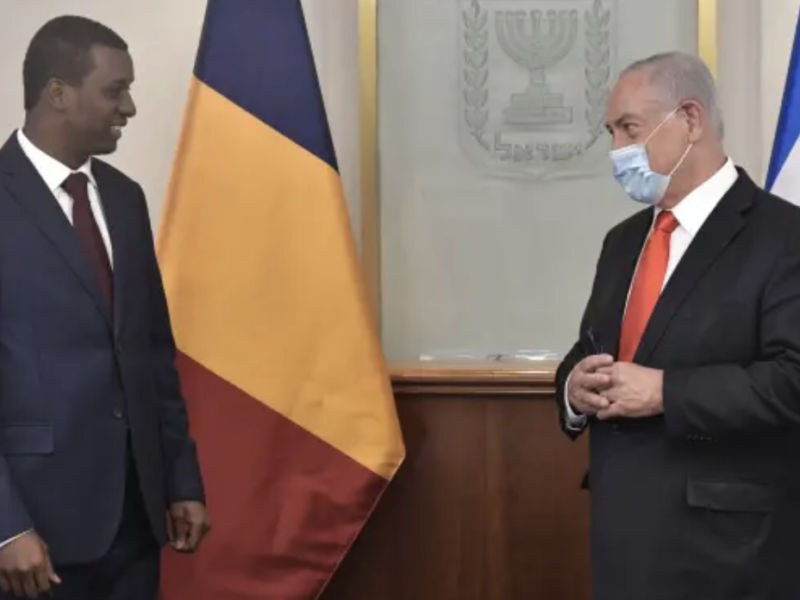 Abdelkerim is the son of Chadian President Idriss Deby.

Netanyahu discussed with them the appointment of ambassadors and the opening of representations, including the possibility of opening an embassy in Jerusalem.

Chad would become the first African country to open its embassy to Jerusalem if it did so.

They also discussed strengthening bilateral cooperation in a range of areas including the war on terrorism, cyber, water and agriculture.

Netanyahu conveyed his “warmest regards” the Chadian president and to the people of Chad.

“I mentioned our relations in the discussions about beginning peace with the Emirates. I mention it and I want to do more than mention it. I want to be able to advance it even further,” he stated.

During the day, the Chadian delegation met with the National Security Council head Meir Ben-Shabbat and Prime Minister’s Office Acting Director-General Ronen Peretz and also held a series of meetings with other officials.

Déby is slated to meet with Foreign Minister Gabi Ashkenazi on Wednesday.

Muslim-majority Chad, a central Africa nation, cut diplomatic ties with Jerusalem in 1972 after a decade of good relations and cooperation.

Israel and Chad renewed their diplomatic ties in November 2018, 46 years after they were cut off, as Chad’s President Idriss Deby met with Netanyahu in Jerusalem, the first Chadian president in history to make the visit.

Chad is one of several African countries to examine and renew diplomatic ties with the Jewish state.

The tide of Israel’s renewed relations with Africa came on the heels of Netanyahu’s historic visit to the four African countries of Uganda, Rwanda, Ethiopia and Kenya in July 2016, the first visit by an Israeli premier in decades.

In the past few years, Netanyahu has been to Africa several times, meeting with presidents of Tanzania, Uganda, Zambia, Rwanda, Togo, Botswana, Kenya and Namibia, as well as the Ethiopian prime minister and other leaders.

Netanyahu has made improving relations with African nations a priority. In his address to AIPAC in March 2016, he observed that Israel has “diplomatic relations with 161 countries, more than at any time in our history.”

For just $100 per month you can bring the gospel to 10,000 homes. Join us as media missionaries! GIVE NOW
VIEW COMMENTS
« Beloved Pastor Dies in Car Accident While On The Way To Help Hurricane Laura’s Victims An Entire Indian Tribe Who Hunted Men Accepted Jesus As Lord »