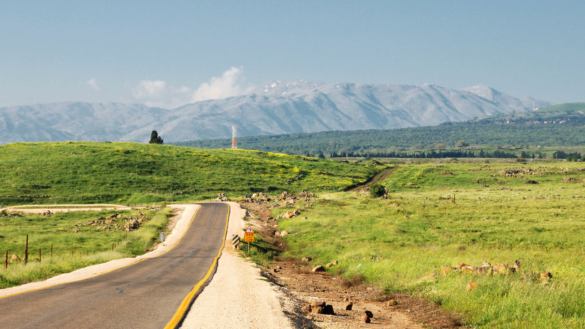 Israel Prime Minister Naftali Bennett announced on Sunday new plans to boost development on the Golan Heights and double the population there within the next four years. The Israeli Cabinet unanimously voted to invest NIS 1 billion ($317 million) in the region and create several new communities and neighborhoods in the Golan.

“This is our moment. This is the moment of the Golan Heights,” Bennett said during a special cabinet meeting at a kibbutz (community) on the Golan. “After long and static years in terms of the scope of the settlement, our goal today is to double settlement in the Golan Heights.” Bennett’s goal is for there to be 100,000 residents in the area.

The Golan Heights span from the Sea of Galilee to the northernmost part of Israel at Mount Hermon. Syria controlled the territory until they lost it in the 1967 Six Day War. Israel officially annexed the land in 1981. While former US President Donald Trump and his administration acknowledged the Golan as part of Israel, the rest of the world does not—they still consider it a part of Syria.

Bennett pointed to a couple of factors that influenced the decision to fund the Golan Heights development project. One—he said the Biden administration has “made it clear that there is no change” in the US position that Israel has control of the Golan. Two—since the COVID-19 pandemic, many Israelis have discovered they can work remotely from anywhere, so why not the Golan—it’s a “great option for those who prefer clean air, space, and quality of life.”

There’s already one new town for Israelis to flock to—Trump Heights—inaugurated in 2019 in honor of Trump and his recognition of the area belonging to Israel.

Plus, Bennett said Israel settling the Golan is much better than Syria taking over again. “Every knowledgeable person in the world understands that it is preferable to have Israeli heights that are quiet, flourishing, and green as opposed to the alternative.”

Currently, about 53,000 people live on the Golan—27,000 Jews, 24,000 Druze (an Arab people group whose religion dates back to the 11th century and is a mix of Islam, Hinduism and Greek philosophy), and 2,000 Alawites (a minority sect of Shia Islam—Syrian President Bashar al-Assad is an Alawi).

The Israeli government intends to upgrade infrastructure, build new neighborhoods and communities, and create 2,000 new jobs by turning the Golan Heights into “the capital of Israel’s renewable energy technologies.”

The hope is to bring innovative agricultural technology projects to the area, including a project where solar panels are mounted over crop fields. Somehow this setup manages to generate electricity AND improve the harvests…innovation in Israel never ceases to amaze me!

The money will also be spent to build 7,300 new housing units and upgrade the roads, internet, and other infrastructure in the Golan. Since the area is pretty sparsely populated and the roads are mostly used by farmers or the military, this will be a boon to the region. If you’ve never been to the Golan, it’s beautiful—open farmland, rolling hills, orchards, and Mount Hermon (which some speculate is the sight of Yeshua’s transfiguration) looms large on the horizon when you get to the northernmost part of the country.

For the first time since the beginning of the pandemic, all the ministers attending the cabinet meeting had to have a rapid COVID test before entering the session. While Prime Minister Bennett tested negative, he got word soon after his speech that his daughter had tested positive. Bennett left immediately and went into self-isolation. His office said he and his daughter are vaccinated.