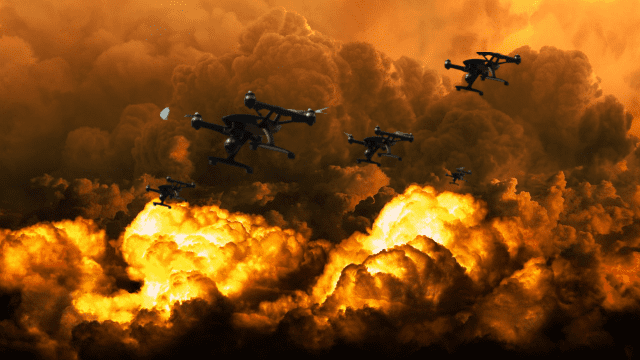 After two weeks of peace, Hamas sent up several incendiary balloons, and Israel sent down a strategic airstrike on a “weapons manufacturing site belonging to Hamas” used for “research and development,” according to the Israel Defense Forces.

The arson balloons, a terror tactic often deployed by Hamas, caused at least four fires along the border with the Gaza Strip.

“The IDF will respond firmly against terror attempts from the Gaza Strip,” an IDF statement reported. Israel Prime Minister Naftali Bennett has called for Israel to respond to the incendiary balloons as though they were rockets fired.

Arson balloons were also launched last month from Gaza after a cease-fire between Israel and Hamas was reached in May. In 2018, Hamas stirred up thousands of Palestinians to launch kites and balloons with incendiary or explosive devices attached. They released them during the dry summer months attempting to wreak havoc on Israel’s agriculture and communities in the south. As a result, thousands of acres were burned.

While Hamas is utilizing low-tech methods to spread terror, Israel continues to advance in smarter ways to defend itself. A recent report from the “New Scientist” details how Israel utilized a swarm of drones in the recent 11-day conflict with Hamas. Israel Defense Forces used artificial intelligence to identify and strategically strike targets in Gaza.

According to the report, while other nations, including the US, Russia, China, and Iran, have drone technology, Israel appears to have been the first to use it on this scale in combat. Drone swarms—“where hundreds of drones…integrate their actions using emergent behavior”—are hailed as the next phase of warfare in the 21st century.

According to the US Department of Defense, drones can provide surveillance, perform precision strikes, deliver small munition payloads, deploy chemical agents, and more.

For just $100 per month you can bring the gospel to 10,000 homes. Join us as media missionaries! GIVE NOW
VIEW COMMENTS
« Fruit of the Vine – Kindness, Always Fire in His Eyes »