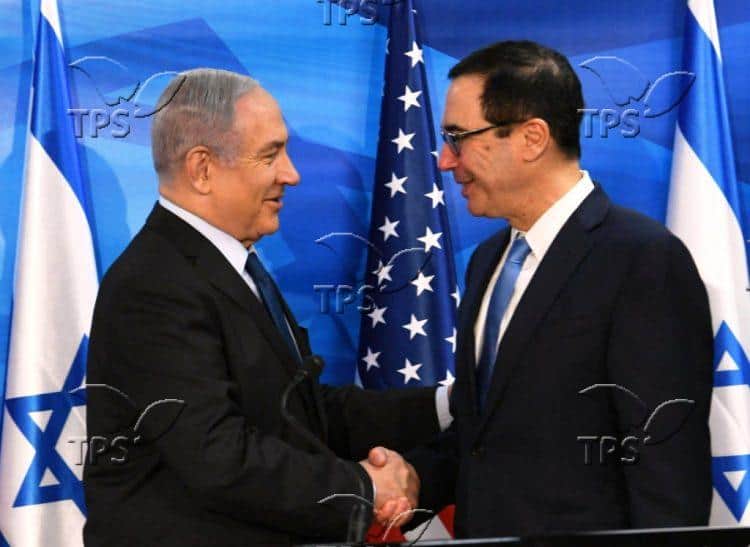 Israel welcomed the US’ announcement that it was leveling new sanctions against Hezbollah and Iranian entities linked to terrorism, saying it was “the proper way to fight Iranian aggression.”

The US Treasury’s Terrorist Financing Targeting Center (TFTC) on Wednesday designated 25 targets affiliated with the Iranian regime’s terror-support networks in the Middle East.

This is the TFTC’s largest designation to date and is focused on entities supporting Iran’s Islamic Revolutionary Guard Corps (IRGC) and Iran’s proxy, the Lebanon-based Hezbollah.

Several of the businesses targeted in this action are providing financial support to the Basij Resistance Force (Basij), a paramilitary force subordinate to the IRGC that “have long been used as shock troops by the regime to oppress domestic opposition with brutal displays of violence, while also recruiting, training and deploying fighters to fight in IRGC-fueled conflicts across the region,” the TFTC stated

Secretary of the Treasury Steven Mnuchin, who was just in Israel, stated that “the TFTC’s action coincides with my trip to the Middle East, where I am meeting with my counterparts across the region to bolster the fight against terrorist financing.”

The TFTC was established in May 2017 to expand and strengthen the counterterrorism cooperation among seven countries — Bahrain, Kuwait, Oman, Qatar, Saudi Arabia, the United Arab Emirates and the US, with an emphasis on terrorism financing.

“The TFTC’s coordinated disruption of the financial networks used by the Iranian regime to fund terrorism is a powerful demonstration of Gulf unity,” Mnuchin noted.  “This action demonstrates the unified position of the Gulf nations and the United States that Iran will not be allowed to escalate its malign activity in the region.”

He underscored that “this coordinated action is a concrete step towards denying the Iranian regime the ability to undermine the stability of the region.”

21 of the targets comprised a vast network of businesses providing financial support to the Basij Resistance Force. The Iran-based network Bonyad Taavon Basij, the “Basij Cooperative Foundation,” employs shell companies and other measures to mask Basij ownership and control over a variety of multibillion-dollar business interests in Iran’s automotive, mining, metals, and banking industries, many of which have significant international dealings across the Middle East and Europe.

These entities have already been designated as Specially Designated Global Terrorists (SDGTs) in October 2018.

“These designations again highlight the degree to which Hezbollah operates as a clandestine, terrorist arm of the Iranian regime by smuggling oil for Iran, raising funds for Hezbollah, and sending fighters to Syria for the IRGC-Qods Force on behalf of Qasem Soleimani,” TFTC stated.

Israeli Foreign Minister Yisrael Katz welcomed the sanctions and thanked Mnuchin for the move, which he said is “the proper way to fight Iranian aggression.”

Katz met with Mnuchin in Jerusalem on Monday and “emphasized that this is the time to continue the maximum pressure campaign on Iran, as it may be the only way to prevent a military conflict.”

Prime Minister also met with Mnuchin and told him that “Iran’s capacity to launch its aggression, to develop its weapons of death, to purvey its menacing ways: that capacity is diminished to the extent you can tighten your sanctions and make the availability of cash more difficult for them. We see this in every part of the Middle East.”

Mnuchin stated that “we have executed on a maximum pressure campaign for sanctions. They have worked, they are working, they are cutting off the money.”

For just $100 per month you can bring the gospel to 10,000 homes. Join us as media missionaries! GIVE NOW
VIEW COMMENTS
« EXPOSED: PA Boycott of Israeli Livestock is Motivated by Senior Officials’ Personal Gains Israeli Consumer Spending Grew Substantially in the Summer of 2019 »