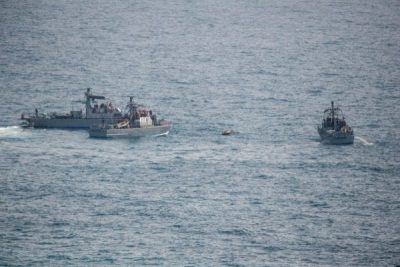 Representatives from Israel, Lebanon, and the US met on Wednesday at a United Nations base at Rosh Hanikra on the border and launched discussions aimed at reaching consensus on a common Israel-Lebanon maritime boundary.

The negotiations were mediated and facilitated by the US team, led by Assistant Secretary David Schenker and Ambassador John Desrocher, and hosted by UN Special Coordinator for Lebanon Jan Kubis.

“During this initial meeting, the representatives held productive talks and reaffirmed their commitment to continue negotiations later this month,” a statement by the US State Department and UN said.

Lebanon stressed that the talks are in no way a sign of normalization with Israel.

The next round of negotiations will be held on October 28.

The issue has been under discussion for over a decade, but only this month the two countries reached an agreement on a framework for the US-mediated talks.

The Hezbollah and Amal Lebanon-based terror groups issued a statement in which they rejected the composition of the Lebanese delegation tasked to negotiate the southern border demarcation.

For just $100 per month you can bring the gospel to 10,000 homes. Join us as media missionaries! GIVE NOW
VIEW COMMENTS
« The Voice 2018 Winner Shares Own Rendition Of ‘How Great Thou Art’ And It’s Beautiful Seafarers Praise God For Safe Rescue From “Pirate Attack” At Lome, Africa »