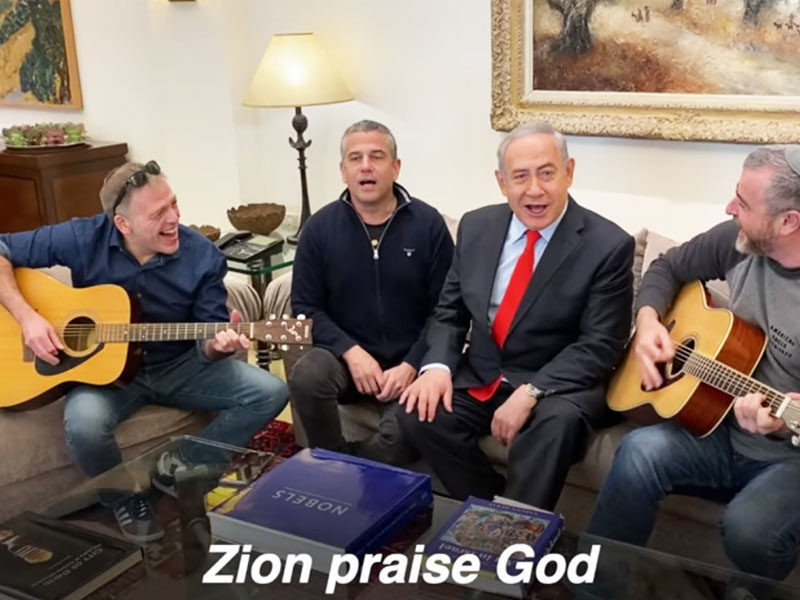 Israel’s Prime Minister Benjamin Netanyahu is known for his great leadership. And once again today, he is being praised by Christians for singing Bible verses on TV.

In a Facebook post by Hananya Naftali on Feb. 15, the Prime Minister is seen singing with fellow Israelis.

Apparently, he joined the Israeli television personalities Yinon Magal, Eral Segal and Shimon Riklin. They were singing Psalm 147:12-13 when he stepped in and sat beside them.

“Praise the Lord, O Jerusalem! Praise your God, O Zion!
For He made the bars of your gates strong,
And blessed your children within you.”

According to BreakingIsraelNews, the entire performance was an impromptu. The video runs approximately two minutes. And now, it has more than 150,000 views on Facebook.

As a result, their heartfelt performance blessed a lot of people. This is clearly evident by several users’ comment on the video.

User Natasha Criste wrote, “Amazing so beautiful to hear the leader of Israel praising God! PRAISE THE LORD AMEN. PSALMS 91 God is our protector and castle ,God is our Salvation, GLORY TO God Amen.”

Another user, Noeline Jense, also commented, “That was a beautiful sight for redemptive eyes.”

And another commenter from Beth Baker said, “Blessed to live at a time when leaders of countries praise God.”

It truly was a beautiful moment to behold; knowing that a great leader of Israel like Prime Minister Benjamin Netanyahu is praising God with his voice. While singing the Bible verses from Psalms, it wasn’t merely an empty performance. They were singing in heartfelt gladness to the great God of Israel!

“Sing to the LORD, praise His name; proclaim His salvation day after day.
Declare His glory among the nations, His marvelous deeds among all peoples.
For great is the LORD and most worthy of praise; He is to be feared above all gods.”
-Psalm 96:2-4

For just $100 per month you can bring the gospel to 10,000 homes. Join us as media missionaries! GIVE NOW
VIEW COMMENTS
« Tim Tebow Would Rather Be Known For ‘Saving Babies’ Than Winning Super Bowls Bread Crumbs Vs The Whole Loaf: Are You Feeding Your Soul? »