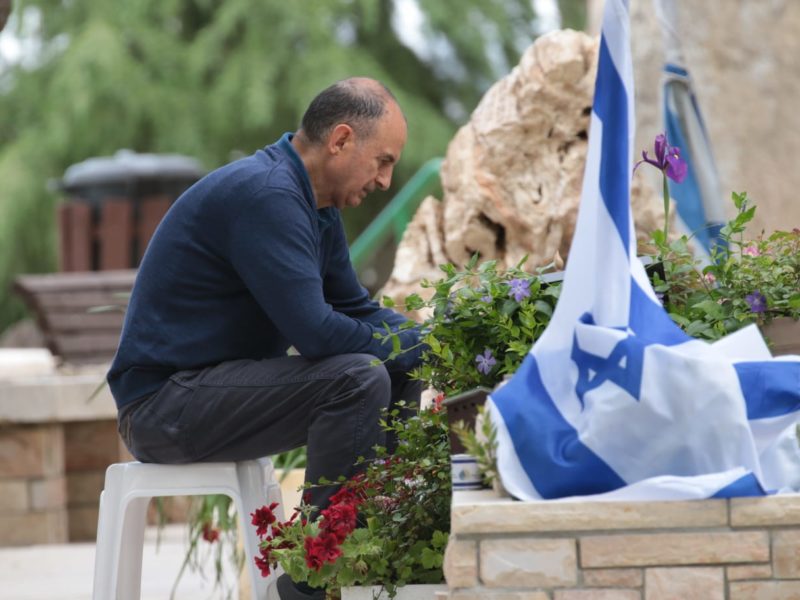 Israel on Monday night came to a standstill to mark Yom Hazikaron, its national Memorial Day, and to commemorate the 23,816 fallen IDF soldiers and 3,153 victims of terrorist attacks who have died in the last 150 years.

The solemn day commenced with a ceremony at the Kotel, during which the nation’s flag was taken down to half-mast. The ceremony was held in a limited fashion and with no audience following the Coronavirus (COVID-19) pandemic.

At 11 a.m. on Tuesday morning, a siren marking Yom Hazikaron sounded throughout the country, bringing the streets to a complete standstill.

In a controversial move, the government decided to shut down the military cemeteries on Yom Hazikaron to prevent mass infection. It called on the bereaved families to visit the graves of their loved ones ahead of Tuesday, but the police announced they would not physically block anyone who chose to arrive at the cemeteries nonetheless.

Yom Hazikaron is one of the most low-spirited dates on the Israeli calendar. Radio and TV stations air documentaries about the fallen soldiers and terror victims.

An Israeli flag was placed on the graves of fallen soldiers in the 52 military cemeteries across the country for Memorial Day.

“We continue in their path, full of determination and motivation, here to continue and fulfill our mission: defending the State of Israel,” stated IDF Chief of Staff LTG Aviv Kohavi.

While the Kotel Plaza “is almost empty, but before my eyes is the entire nation of Israel which we have vowed to defend, all IDF soldiers past and present, and in the first rows, the sad members of the bereaved families,” he said.

Since the establishment of the state, 3,153 civilians were murdered in acts of terrorism. Since last year’s Yom Hazikaron, only one Israeli, Rina Shnerb, was killed in an attack.

The terrorist attacks have left 3,241 orphans, including 120 orphans from both parents, 817 widows and widowers and 897 bereaved parents who are still alive.

The numbers include members of the Israel Defense Forces, the Shin Bet (Israel’s Security Service), the Mossad, the Israel Police, the Israel Prisons Service and the World War II Jewish Brigade, including 148 fallen soldiers who were also Holocaust survivors and soldiers who died from their disabilities suffered during combat.

For just $100 per month you can bring the gospel to 10,000 homes. Join us as media missionaries! GIVE NOW
VIEW COMMENTS
« Israel Joins Efforts in China to Return to Life After Coronavirus GOD TV Makes History In Israel With Shelanu TV! »