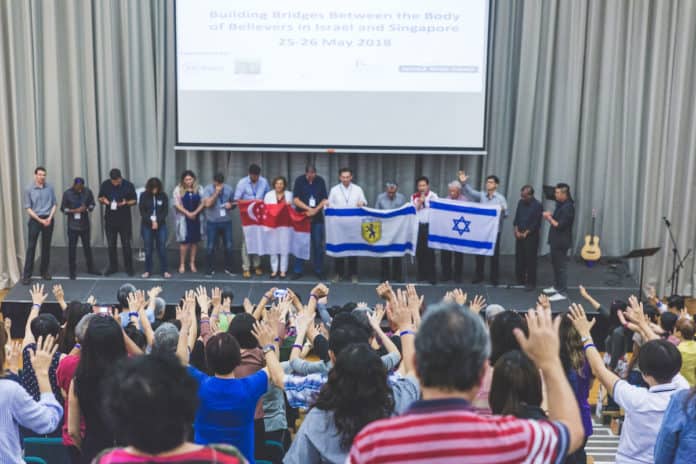 Singapore has been in the news recently due to the US / North Korea Summit however it was also the venue for a conference aimed at building bridges between believers in Israel and Singapore.

The first All Israel Conference took place in Singapore from May 25-26, 2018,  a ‘one new man’ event with the stage shared between ministry leaders from Israel and Singapore. Each session featured an Israeli speaker and Singaporean speaker on the same topic. Conference participants from both nations interacted with one another between sessions throughout the two days.

The highlight of the conference was the closing session on Saturday evening, entitled A Night to Honor the Messianic Community in Israel. Leaders from eight ministries, seven Israeli Messianic Jewish ministries and one Israeli Arab-Christian ministry, shared first-hand about their work. These ministries are fruitful and well known within Israel, but not widely known outside of Israel, especially not in Asia. The purpose of the All Israel Conference was to raise the awareness of these Israel ministries and build bridges between our believing communities.

1) Return Ministries helps Jews immigrating to Israel (called “Aliyah” in Hebrew) to begin a new life in Israel.
2) Be’ad Chaim (or pro-life in Hebrew) serves women contemplating abortion and has, to date, saved more than 2000 babies.
3) Lech Lcha runs a 3-month after-army discipleship program.
4) HaChotam focuses on discipleship of youths and children, teaching and production of Hebrew Messianic literature and songs.
5) The Joshua Fund reaches out to the poor and needy and blesses many Israeli Jewish and Arab ministries.
6) Kehila News Israel/ allisrael.com an online news portal for the Messianic Jewish community in Israel which also has a key role to disseminate news about the Body of Messiah in Israel to the rest of the world.

This was the first time Israel supporters in Singapore got to know about these ministries which are amazingly strategic and much-needed. This initiative has opened up new opportunities to bolster the work of reaching God’s Chosen People as well as to strengthen the Messianic Body in Israel, not just for believers in Singapore but worldwide.

Future “All Israel Conferences” will feature representatives from other ministries in Israel as well as leaders of Messianic Jewish congregations so that hand in hand, as Jews and Gentiles, we can co-labour together to fulfil our common mandate to bring light to the nations of the world, and especially to His Chosen People.

The final session of the conference ended with the Israeli delegation praying for Singapore followed by a group of Singaporean pastors praying for Israel.

This article was written by Chan Siew Fong of the Prayer for Israel (PFI) ministry in Cornerstone Community Church, Singapore, for Kehila News Israel.