Israel to Launch Lunar Module By Year’s End; Will Become Fourth World Power to Land on the Moon 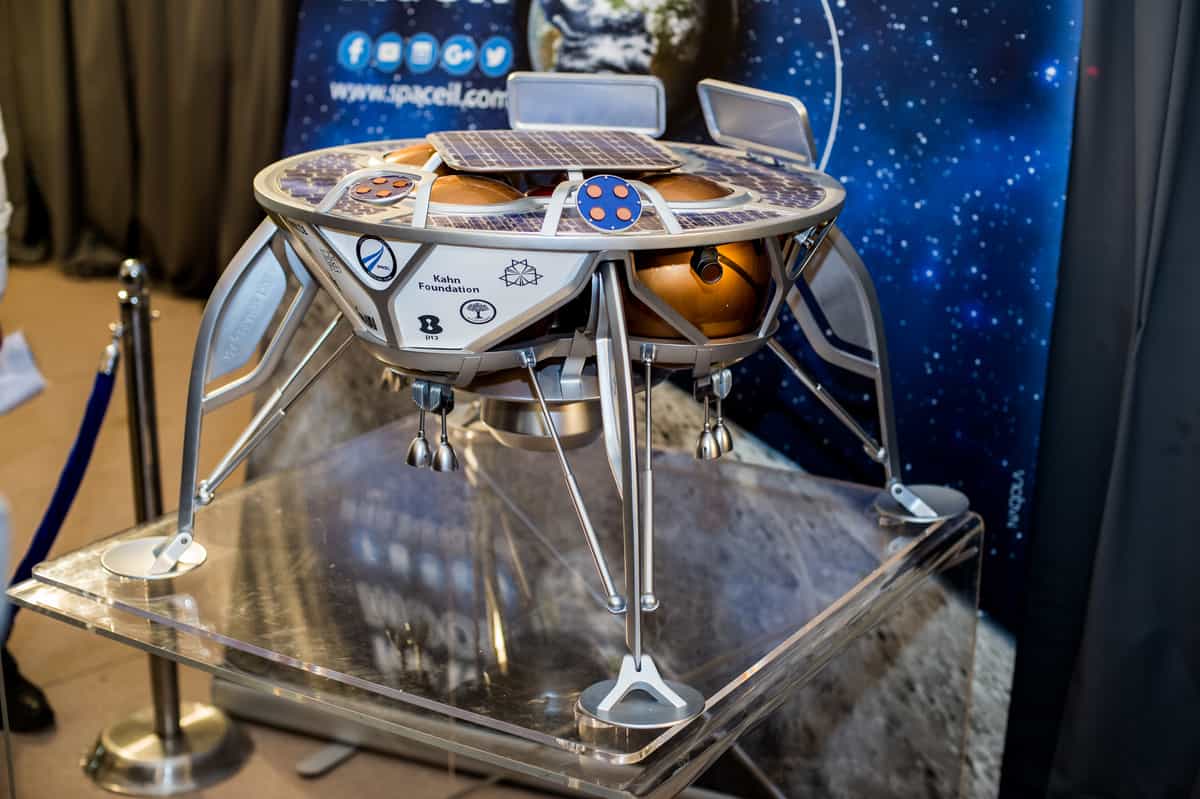 The doors of a top-secret hangar at the Israel Aerospace Industries (IAI), Israel’s prime aerospace and aviation manufacturer opened on Tuesday to reveal what might qualify as the country’s most significant technological achievement to date: A lunar module, locally developed and built, that will make Israel the fourth country in the world to conquer the moon when it lands on the moon next February.

The 5-meter tall, 2-meter wide (with legs extended), 600-kilogram craft was developed jointly by IAI and the not-for-profit SpaceIL organization, will be the smallest vehicle ever to land on the moon, as well as the most inexpensive, cashing in at just NIS 320 million, all from private donations.

Presenting the module to the media, IAI chief executive Josef Weiss said that opening space exploration to the civilian sector will serve as an “engine of innovation, technology, education and groundbreaking.”

“I regard the launch of the first Israeli spacecraft to the moon as an example of the amazing capabilities once can reach in civilian space activity. The State of Israel, which is already firmly planted in the realm of space in its military activity, must harness resources for the benefit of civilian space… The accomplishment we will soon achieve is the fruit of intensive labor of many years, of the best of minds. Reaching such an achievement specifically during Israel’s 70th year symbolizes how far we have come, and particularly the endless accomplishments that we can still achieve.

“IAI will continue doing all that is needed in the coming months to ensure the success of this national mission,” Weiss added.=

Having completed construction of the spacecraft, lead engineers Yariv Bash, Kfir Damari and Yonatan Winetraub, now have five months to subject Jewel, as they call the spacecraft, to a series of tests to simulate the extreme conditions of outer space. In November, it will be shipped to the launch site at Cape Canaveral, Florida in November and loaded onto a Falcon 9 rocket, built by Elon Musk’s SpaceX company, and shot into space the following month. Landing on the moon is scheduled for February 13, 2019.

Dressed in white lab coats, including special head-and-shoe covers in order to avoid contaminating the spacecraft environment while showing the vehicle to reporters, mission officials said the spacecraft will enter the earth’s orbit and circle the planet in an ever-expanding elliptical pattern after separating from the launch rocket. Eventually, the craft will be drawn into the moon’s orbit, upon which mission control operators will measure data received from the craft in order to prepare the module for landing.

The spacecraft will travel at a speed of about 10 kilometers per second (36,000 km/hour), or 13 times faster than the top speed of an F15 fighter jet. The flight route will ultimately cover approximately 9 million kilometers, despite the fact that the distance between Earth and the moon is approximately 384,000 kilometers: SpaceIL officials said the long course was chosen in order to minimize fuel consumption.

Once on the moon, it is programmed to film itself, broadcast the images to earth and measure the moon’s magnetic field as part of a scientific experiment conducted in collaboration with the Weizmann Institute of Science in Rehovot. Two days after landing the spacecraft will plant an Israeli flag on the surface of the moon, bringing the mission to its conclusion..

Morris Kahn, a South African-born businessman and philanthropist who is best known as the founder of the Amdocs software giant and the president of SpaceIL, said the landing of an Israel-built vehicle on the moon is an obvious point of national pride. But he added that that goal was only part of the reason he had taken it upon himself to lead the project.

But he added that he expects there to be concrete benefits that emanate from the project as well.

“I hope the day we land an Israeli spacecraft on the moon sets in motion an ‘Apollo effect’ in Israel, that encourages the next generation of Israeli children to choose to study science, technology, engineering and mathematics. (I want them) to dream big even in our small country…SpaceIL’s goal is to inspire the kids in Israel to think differently about science, technology, engineering, and math through lectures throughout the country and participation in educational events that are available to all,” Kahn said.

To accomplish that goal, Kahn pledged about NIS 100 million to fund the project when

Bash, Damari and Winetraub entered the Google competition, and recruited several prominent philanthropists to join him, including American casino magnate Sheldon Adelson, the Charles and Lynn Schusterman Family Foundation and the Parasol Foundation Trust, a British organization that focuses on development projects in the areas of education, disaster relief, health, medical research, culture and heritage and female enrichment.

“I promised myself this project was not going to encounter problems because of money,” Kahn said.