BREAKING
Israel-led Team Solves Mystery Why Lightning Strikes Fewer Times Over The Ocean...
Tourism In The Holy Land Is Soaring Back Up To Pre-Pandemic Highs
Lapid Speaks Directly To Palestinians—Offers Them “Another Way” Out Of The Ongoing...
Home Israel Israel, UAE Ambassadors To UN Hold Inaugural Meeting 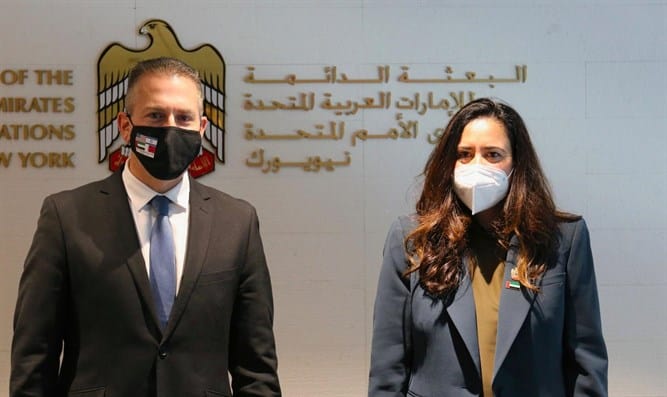 The meeting was held at the UAE Mission to the UN.

During the meeting, the ambassadors “stressed the importance of increasing cooperation between the two countries in order to expand the benefits of peace in the Middle East,” Israel mission to the UN stated.

The two discussed “different areas of significant opportunity for both countries to the entire region.”

The ambassadors agreed to promote a number of issues at the UN, including the response to the Coronavirus (COVID-19) pandemic, digital cooperation and countering extremism online, empowering women, climate action and environmental protection.

“Today history was made. I, Israel’s ambassador in Azerbaijan, met the acting Ambassador of the UAE: the first meeting between Israeli and Emirati Ambassadors in Baku– and the first anywhere to be held in Arabic. Peace is possible. We must never lose hope in our common future,” Deek said after the meeting.

Earlier this month, the UAE and Israel envoys in Nigeria met, the first public meeting between diplomats of the two countries in Africa.

Several Israel and UAE ministers have already held a conversation and have established a working relationship.

Israel, the UAE and Bahrain signed a historic peace agreement at the White House last earlier this month, the first agreement to be signed between Israel and an Arab country in 25 years.

The UAE is the first major Arab state to recognize Israel since the Israel-Jordan Peace Treaty was signed in October 1994.