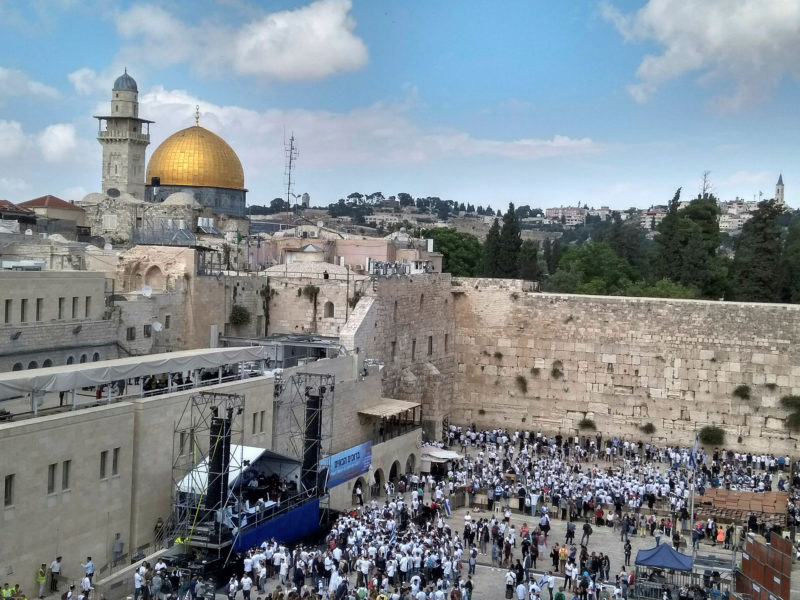 The Golden Gate area has been closed under a court order since 2003 after it was used for terrorism, but the Waqf and Muslim worshippers have re-accessed the area and essentially established another mosque, the fifth on the Temple Mount.

Several dozen Israeli activists took part in the meeting to asses the urgent situation, at the end of which they called for Israeli mass visits to the Temple Mount on Thursday “to strengthen the Jewish hold on the holy site.”

They also issued a demand for a synagogue on the Temple Mount.

The assembly also issued a call to have the Waqf declared an illegal organization and to have it banned from the Temple Mount.

The participants in the emergency conference also called on Israeli political parties to demand the permission of Jewish prayer on the Temple Mount as a precondition for any coalition agreement.

Jews are currently banned from any form of prayer on the Temple Mount, and any attempt to do so by a Jew is promptly thwarted by the Waqf and the police and can end with the arrest of the Jewish worshipper.

The Golden Gate area, known by the Muslims as the Bab al-Rahma, remains open despite Israeli attempts to close it and in violation of a court order.

The Muslims view the reopening of the area as a show of defiance against Israel, and with no Israeli response to this change of the status quo on the Temple Mount, a victory over Israel’s presence in Jerusalem.

The Muslim leadership alleges that Israel wants to keep the Golden Gate sealed off for Muslims “in order to give Jewish fanatics, who call for rebuilding their temple inside Al-Aqsa compound, free access and presence in the area.”

The Muslims, as well as the Hamas terror organization, have threatened an outbreak of violence if Israel attempts to re-shut the area.

Israeli police on Sunday handed the Chairman of the Waqf Council in Jerusalem Sheikh Abdul-Azim Salhab an order banning him from entering the Al-Aqsa Mosque compound for 40 days, the latest Muslim leader to receive such an order in wake of the unrest on the Temple Mount.

The Palestinian Authority’s (PA) Ministry of Foreign Affairs “condemned in the strongest terms” the Israeli authorities’ “arbitrary” ban on the entry of Waqf officials as “a dangerous escalation aimed at preventing Muslim worshipers’ access to the mosque and undermining the role and work of the Waqf.

The ministry in a statement Monday alleged that “Israel attempts to empty the mosque of Palestinian citizens and Muslim worshipers, which it stressed come as part of its plans to enforce the temporal division of al-Aqsa until it is spatially divided.”

The ministry warned of the repercussions of “these Israeli arbitrary measures against al-Aqsa mosque,” which it claimed “comes within the framework of the Judaization and altering of the character and identity of the city of Jerusalem.”

For just $100 per month you can bring the gospel to 10,000 homes. Join us as media missionaries! GIVE NOW
VIEW COMMENTS
« US Army Drills deploying Advanced THAAD Defense System to Israel Israeli Minister to 10 Countries after Exposure of BDS-Terrorism Ties: Stop Funding Anti-Israel Orgs »