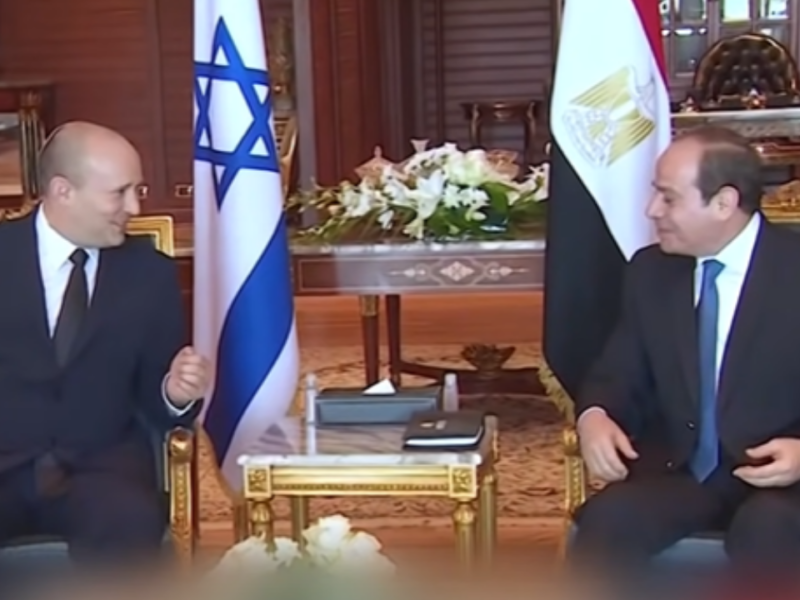 Bennett described the summit with Sissi as “an important and very good meeting” and that the two leaders “laid the foundation for deep ties moving forward.”

Egypt and Israel go way back…we’re talking thousands of years—think Abraham, Isaac, Jacob, Joseph…and Jesus. In modern history, in 1948, when Israel became a nation again (after almost 2,000 years scattered among the nations and surviving 52 attempted genocides), our new neighbors—Egypt and several LARGE Arab nations—promptly tried to wipe us off the face of the earth. But, God! Against all odds, we won that war and started to rebuild our nation from the ground up. Egypt and friends tried again to take us out in 1967, but in only 6 days, we turned the tide and won that war as well. Egypt didn’t get the hint, though, and tried again in 1973, when they and a coalition of Arab states attacked us on Yom Kippur (the holiest day of the year, when even our soldiers are in synagogue praying). Once again, though, with the help of God and our brave soldiers, we repelled the onslaught.

Did you know that when young cadets in America study war strategy in the academy (think West Point) that when they look at Israel’s wars, they just have to shrug?! We are a small nation and have fought off some mighty foes—and while our forces and technology are among the best in the world, you have to admit there is a supernatural element to our victories.

Not long after Egypt’s last defeat, our two nations came to the negotiating table—and eventually signed a historic peace agreement in 1979. Jimmy Carter was the president of the United States, Menachem Begin was Israel’s prime minister, and Anwar Sadat was the president of Egypt. Begin and Sadat actually shared the Nobel Peace Prize in 1978 for their efforts. For his efforts, Sadat was assassinated.

So, for over 40 years, Israel and Egypt have enjoyed peaceful (but not always cordial) relations. During the ill-named Arab Spring, the Muslim Brotherhood seized power in Egypt. Yes, they won an election, but the people didn’t know what they were buying into. It was a step backward. Sissi, who was Egypt’s commander and chief over the army, led a military coup of the government and held new elections, jailing the Muslim Brotherhood’s Mohamed Morsi and declaring the group illegal. Urged on by supporters, Sissi himself ran for president and won.

Egypt has stepped up its efforts as a major player in trying to broker peace between Israel and Hamas (or at least a ceasefire). Hamas is not much interested in peace, but Egypt has some leverage there.

Prime Minister Bennett thanked President Sissi for Egypt “continu(ing) to serve as a cornerstone in Middle East security and stability.”

The two leaders and their teams also discussed the mutual threat of Iran’s nuclear ambitions, as well as how to boost trade and tourism between Israel and Egypt.

Since the end of the Hamas-Israel war in May, Egypt has played a role in the reconstruction of Gaza. After the meeting with Bennett, Sissi released a statement stressing the need for a two-state solution for the Palestinian conflict.

The “two-state solution” idea has resurfaced since Bennett’s new coalition government took over a few months ago. On Tuesday, back in Israel, Bennett fielded reporters’ questions on the topic. Bennett said he couldn’t see any “logic” for meeting with Palestinian Authority President Mahmoud Abbas and that a Palestinian state would be a “terrible mistake.”

For decades, Egypt and Jordan have been the only neighbors officially at peace with Israel. But last year’s historic Abraham Accords shifted the dynamic in the region, as Israel gained allies in the UAE, Bahrain, Morocco, and Sudan. A paradigm shift seems to have occurred in the region, where the mutual threat of a nuclear Iran is greater than the dynamics of the Palestinian-Israel conflict.

The shift even played a significant role in Bennett being able to form his new government. Islamist Arab leader Mansour Abbas is a coalition partner, a first in Israel’s government. On Wednesday, Bennett was named in Time magazine’s list of the world’s 100 Most Influential People. Abbas actually was the one who nominated him, saying, “someone courageous needs to make that change.”

Prime Minister Bennett is set to address the United Nations for the first time on September 27.

For just $100 per month you can bring the gospel to 10,000 homes. Join us as media missionaries! GIVE NOW
VIEW COMMENTS
« Jewish Man Discovers That Yeshua Is Not A Betrayal Of Their Heritage, But The Fulfillment Of It God Is Answering Our Prayers By Giving Us Seeds »