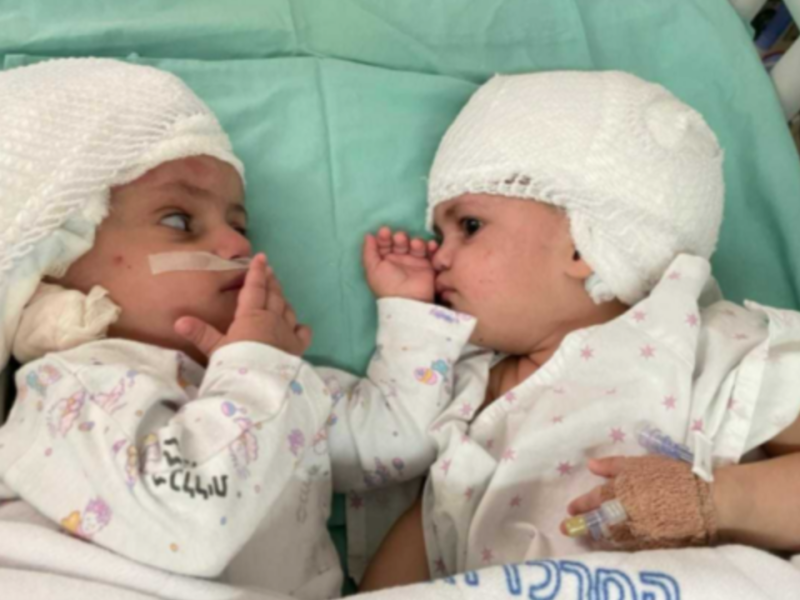 It took hundreds of hours of preparation and countless “practice” operations on sophisticated 3D models designed by Israeli technology experts. But on Sunday, after a grueling 12-hour “life and death” surgery, Israeli doctors announced they had successfully separated twins who were joined at the back of their heads. This complex operation was a first for Israel.

Dr. Isaac Lazar, head of the Pediatric ICU at Soroka University Medical Center in Beersheba, and an extensive team of medical professionals had been preparing for this operation since before the baby girls were born a year ago.

“Any wrong decision could have been the difference between life and death. It was so delicate, as the surgery was performed between major blood vessels in the babies’ heads. We all knew that any bleed could have catastrophic consequences,” Lazar said.

The surgery was performed late last week, and on Sunday, the sisters, who had been together for over a year, saw each other for the first time.

“When the nurses brought the babies together, newly separated, they looked at each other, made noises, and gently touched each other—it was beautiful,” Lazar noted. “You could see the communication between them, and it was just so special.” The parents were filled with “unbelievable joy,” Lazar shared.

Conjoined twins are extremely rare and successfully separating them is not always possible or successful. However, both girls are expected to lead normal, healthy lives once they heal and undergo developmental therapy.

“Because the babies couldn’t move their heads for the first 12 months of their lives, there’s a physical handicap, but with the right rehabilitation for their physical and cognitive development, we expect them to catch up with their milestones.”

For just $100 per month you can bring the gospel to 10,000 homes. Join us as media missionaries! GIVE NOW
VIEW COMMENTS
« Taliban Willing to Work with All Nations—Except Israel Finance Committee Approves Coronavirus Rules For Knesset Workers »