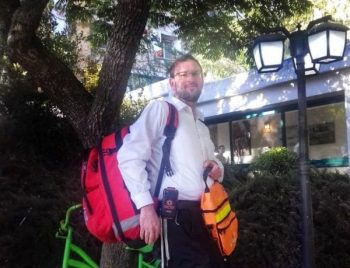 Elkana Breuer, a resident of Beitar Illit, works as a singer and keyboardist and teaches in an elementary school.

On Rosh Hashanah, he prayed in a small minyan where the congregation strictly adhered to all of the rules of the Health Ministry and acted in accordance with the guidelines.

However, 10 of the 20 participants contracted the Coronavirus (COVID-19) at the minyan. Breuer’s entire family subsequently contracted the virus, except for one daughter.

The family suffered from severe symptoms which made staying at home difficult, so they all went to the Corona Hotel located in Ma’aleh HaHamisha.

A day or two after his arrival, Breuer began to feel better and told the staff that he was an EMT.

“Since I made it known that I am a United Hatzalah volunteer EMT I have not rested for a moment,” Breuer shared. “I have been called upon to provide medical treatment to many people here at the hotel who have little or no other resource for medical attention.”

Having the virus himself meant the Breuer was free to treat any of the patients at the hospital. To some who were suffering from severe respiratory problems related to the virus he provided oxygen and first aid care and then called for an ambulance to transport them to a hospital in Jerusalem.

“There was a man here who needed help. He was in really bad shape. I was called and provided him with oxygen and called for him to be transported immediately to the hospital. A few days later, he was transported back to the hotel and was doing much better thanks to the care he received. He was very well received here back at the hotel and I see him and his wife walking around the grounds a lot. Seeing them walking around makes me and everyone else here very happy,” Breuer relayed.

Breuer has treated dozens of people in his three-week stay at the hotel. “I treat about 10 cases or more each day. Whether it is people who trip down the stairs, suffer broken bones, shortness of breath related to COVID or other diseases, I am pretty much responding to a call all the time.”

He recalls one incident with an infant that stuck a bead up her nose and he instructed the parents not to try and pull it out but rather go to the hospital to have it removed properly.

In another incident, someone had a severe allergic reaction to some dairy products that they mistakenly consumed. They also had to go to the hospital.

“The majority of the work comes down to reassuring people and identifying which cases are urgent and need to go to the hospital and which are not and can be treated here,” he said.

Breuer said that there is a doctor that comes to the hotel daily for a few hours at a time but getting an appointment is difficult and oftentimes, emergencies happen when the doctor is not on the premises. “Being here has really given the other occupants a sense of comfort that in the case of an emergency there is someone here who can help them. I’m happy to do it, but it has certainly not been a restful stay for me here,” Breuer quipped.

Not all of the instances of Breuer’s help were medical.

On Saturday night, Breuer led the occupants of the hotel in a special musical event for Hakafot Shniyot the night following after Simchat Torah. During the festivities, one of the mothers gave her son his first haircut, a special celebratory occasion for a child who turns three according to Chassidic tradition.

In a similar event, Breuer led a special celebration in honor of one of the young men finishing a tractate of Talmud on the intermediary days of Sukkot at a Simchat Beit Hashoeva party in which he also sang for the occupants.

“All of us who were here for the holidays banded together and worked hard to celebrate the joy that the holidays bring. We have to focus on the good in life in spite of the illness. There is always good, and there is always joy. We just need to find it and focus on it. Helping people brings joy. Culminating life-cycle events and maintaining traditions brings joy,” he said.

“Even here amid so many people who are suffering from the virus, we must all realize that we are healing and we will live through this. So in the meantime, we must utilize the opportunity we have to help others and bring joy to others. It’s a bit of light amid the darkness and it is so important,” Breuer concluded.