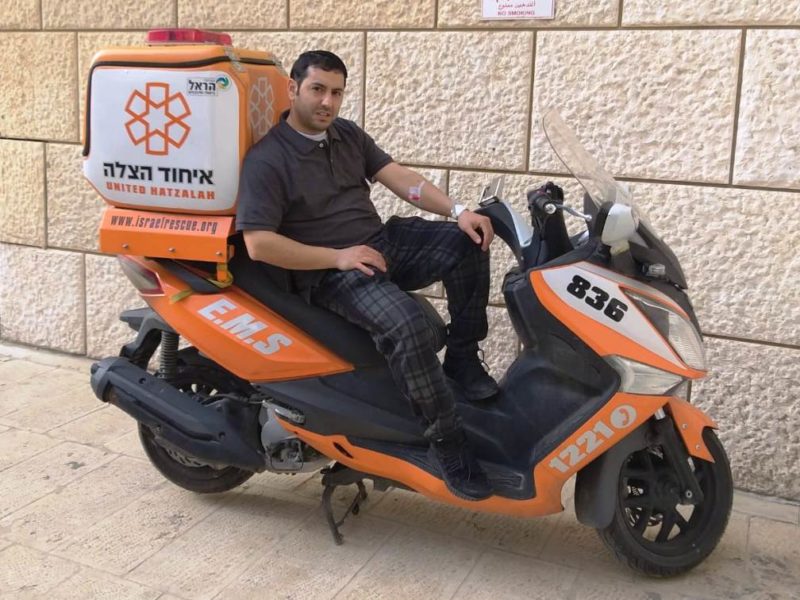 Yisrael Otmazgin. An Israeli Jew, saved the life of a Muslim American boy that he had never met.

According to international law, it is forbidden to reveal the identities of the donor or the recipient of a bone marrow donation, and therefore, Otmazgin shared his story only this week, a year after he underwent the donation procedure.

A few days ago, he received a phone call from the coordinator of bone marrow donations at Hadassah Ein Kerem hospital.

“The family of the recipient child of your bone marrow wants to contact you and I know that you have expressed interest in being in contact as well, so please sign a confidentiality waiver and I’ll connect you,” the coordinator said.

24 hours later, he learned that the recipient was a young boy from Michigan.

He wrote the boy’s family that he very much hoped that he had helped save the boy’s life.

A few minutes later, he received a reply. “Hi, This is ******. Israel, thank you so much for saving my son. I cannot thank you enough. I am really excited to meet you too.”

“At that moment, there was likely no one happier on the face of the planet than myself. We arranged for a video meeting the next day. As soon as the meeting started, the tears flowed as the mother of the recipient told me what happened to her son,” he recalled.

The boy was born with a rare and debilitating physical ailment called Severe combined immunodeficiency (SCID). The disease prevents the body from properly developing an immune system. This means that even the most insignificant bacteria or virus can kill the boy. Children with the ailment are kept inside a “vault” in the hospital to make sure that they do not contract any illness. Their normal life expectancy is less than a year if a bone marrow donor cannot be found.

The boy’s two older brothers were only a 50 percent match, but out of 44 million people in the donor database, Otmazgin in Israel was a complete match.

Following the transplant, the recipient’s body responded well to the treatment and there was an immediate improvement in his medical condition. Since then, he has contracted three illnesses that are common for young children and his body overcame the illnesses each time. The transplant succeeded.

“This means that he is also partly your child. He is alive because of you and we have no way to say thank you,” the mother told Otmazgin.

They introduced each other’s family, and then Otmazgin met the boy, “full of life and joy.”

“I was a bit surprised that here I am in Israel, an ultra-orthodox Jew, and I saved the life of a Muslim boy in the United States by donating part of my bone marrow to him,” Otmazgin shared.

However, after his initial response, he realized “what kind of connection God made here – a connection of life and love between two people who in regular day-to-day life would likely never meet one another and if they did meet would most likely not like one another.”

“We all have dreams of what our children will grow to become. Now this family has a chance for their son to realize both his dreams and theirs,” he added.

“I am an EMT with United Hatzalah of Israel, the national EMS organization whose volunteers drop whatever they are doing and rush to save lives at a moment’s notice. I also serve in the IDF Home Front Command elite rescue unit as a reservist and often come across death serving as a ZAKA volunteer. With that in mind, I am happy to be involved with anything that can save a life, no matter whose life that is,” he said.

“I am an Israeli and I live in Israel, yet I saved the life of this young Arab boy in the United States. I am incredibly happy about being able to do so and I sincerely hope that my story will serve as a guide for the sanctity of life to people all over the world,” he concluded.

For just $100 per month you can bring the gospel to 10,000 homes. Join us as media missionaries! GIVE NOW
VIEW COMMENTS
« Abbas Declares End to Agreements with Israel, US Thy Kingdom Come Conference Launches ‘Prayer And Care’ In Response To COVID-19 »