Israelis Save Arab-Israeli Business From Closing 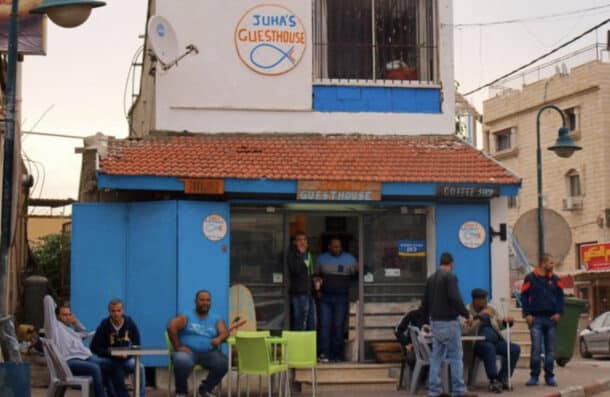 Israelis — moved after hearing that Juha’s Guesthouse, a small hostel in an Arab seaside town in Israel, was in danger of closing down due to a second nationwide lockdown — donated enough money to save the small business.

Unlike what the BDS movement would have you believe, Israel is a model of Jewish-Arab coexistence in many locations across the country. Juha’s Guesthouse, established six years aogo by Ahmad (Juha) Jorban and his Israeli partner Neta Henien, is one such example.

The pair sought to develop the small fishing town by attracting Israelis to stay there. They even offer Arabic language classes to Israelis and have mangled to attract thousands of local and some foreign tourists inbthe past few years.

“Language brings hearts together and it helps to change prejudices,” Jorban said.

Hotel manager, Naama Goldman-Shwartz, said the establishment has become a symbolic retreat for thousands of Israelis looking for a different kind of vacation. With all the new tourism traffic, local businesses such as restaurants and cafes were spurred on to open as well.

Now amid a second lockdown that shutters hotels as well as most other businesses, the small guesthouse is in danger of closing. But Juha’s Guesthouse — located in an off-the-beaten-path Muslim town — has become a cause for Israeli celebrities and anonymous donors who stepped in to help the business.

“I recently discovered a beautiful place in Jisr al-Zarqa, a guesthouse founded by a Jewish woman and an Arab man whose goal is to create real encounters between Jews and Arabs,” Israeli singer Achinoam Nini posted an appeal on social media. “Now, in the time of the coronavirus, the guesthouse is experiencing many difficulties and needs your help.”

A crowd-funding page enabled them to raise $76,000 from some 1,200 donors giving them “a little more fuel” for now, Jorban said.

Thankfully, despite being an Israel-based business, they have yet to be boycotted.