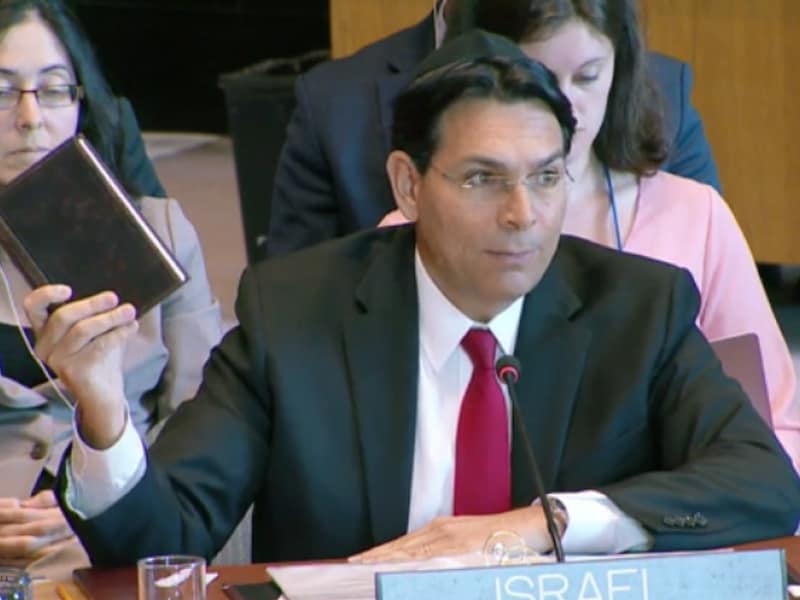 Israel’s Ambassador To The UN Danny Danon has used Scripture to prove the State of Israel belongs to the Jewish People.

At the United Nations Security Council on Monday, May 6, 2019, he raised the Bible to defend the Jewish claims to the land. During his speech, he used the Bible, history, international law and the pursuit of international peace and security to make his case.

Danny opened the Bible and read from the book of Genesis about the covenant between God and Abraham.

Deed to the Land

He then raised up the Bible and claimed it as the title deed to the land of Israel. “This is the deed to our land,” Danny declared confidently.

He also emphasized that all the Abrahamic religions (Judaism, Christianity, and Islam) attest with the Jew’s ownership of Israel.

“The Qur’an itself accepts the divine deed of the Jewish people to the land of Israel,” he added.

‘The #Koran itself accepts the divine deed of the #Jewish people to the land of #Israel,’ says Israeli Ambassador @dannydanon in his address to the UN Security Council: pic.twitter.com/a5hbT5rWk0

Danny also explained the history of how Jewish rights over Israel have been contested over the centuries but this doesn’t change God’s plan for Israel to be their permanent possession.

“In 70 CE, Roman Emperor Titus destroyed our Second Temple, expelled the Jewish people, and renamed the land nestled between Egypt and Lebanon ‘Syria-Palestina, as a southern province of Syria. THAT is where the name Palestine comes from, though Jews still lived in Jerusalem,” he argued.

Share this to others if you believe that the Jewish people are the rightful custodians of the State of Israel.