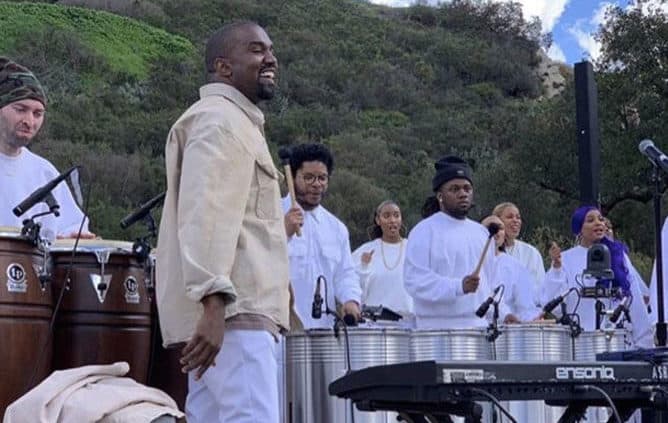 Kanye has opened up about his faith journey in the past and has written songs that contain deep spiritual meaning. Most recently fans have been able to enjoy his ‘Sunday Service’ gatherings… which Variety Magazine describes as “where spirituality and exclusivity meet.”

In the Instagram post below from Fred Hammond you will get a taste as you watch Kanye on the keyboards leading an energetic rendition of “This is the day that the Lord has made.”

Kanye credits Chance, the Rapper for helping him return to Christ (read post) and now has a heart to share God’s love.

“I know from the bottom of my soul, of my gut, of my spirit and my subconscious that love is the strongest force in the universe and right now we need love.”

Kanye recently announced that Sunday Service will be at “the big show in the desert” and how he has been holding weekly performances to serve as rehearsals.

“We were out in Palm Springs and they took us to a little campground because we were thinking about a little performance in Palm Springs, just a little one,” Kanye said in a clip shared by the festival.

Pray for Kanye and others who are using their fame to make a stand for God. Pray that he would raise them up as testimonies of His grace and may he inspire many others to rise up boldly in their faith.

Read Also: Chance the Rapper Goes on Hiatus to Study the Word of God