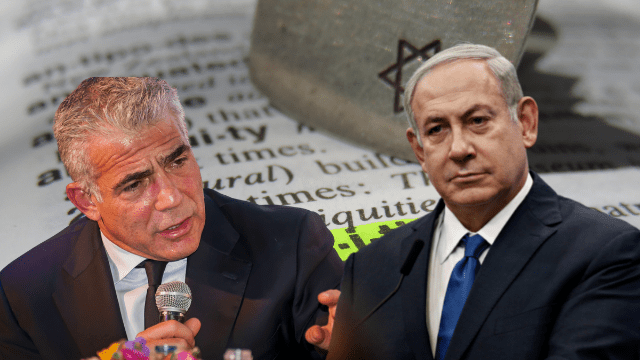 Last Wednesday, at the 7th Annual Global Forum for Combatting Antisemitism, Israel Foreign Minister Yair Lapid made big waves with his short speech that reframed antisemitism as not “the first name of hate, but its family name.”

“The anti-Semites weren’t only in the Budapest Ghetto (where his father and grandmother were captive)” but that “anti-Semites were also slave traders who threw people bound together in chains into the sea…anti-Semites were the extremist Hutu in Rwanda who massacred Tutsis…” He said they are also the “Muslim fanatics” who kill gay people and others. And the Holocaust was the “extreme manifestation of hate.”

“Antisemitism isn’t the first name of hate, it’s the family name, it is anyone who hates so much that they want to kill and eliminate and persecute and expel people just because they are different,” Lapid said.

After the speech, Opposition Leader MK Benjamin Netanyahu pushed back on Lapid’s definition, calling it “outrageous and irresponsible,” and warned that it minimizes the concept of antisemitism. He cautioned that it weakens the idea that antisemitism is unique among all the cruelties humans have done to one another through the ages.

“Even though antisemitism, hatred of Jews, is part of the general human phenomenon of hatred of the foreigner, it is different from that in its strength, durability over thousands of years and its murderous ideology that has been nourished throughout the generations in order to pave the way for the destruction of the Jews,” Netanyahu countered.

I think Lapid exposes a critical fact—all racism is ugly and displeasing to God. We are ALL created in God’s image; therefore, we ALL have equal worth. It has nothing to do with our skin color, ethnicity, nationality, race, or sex.

However, I disagree with Lapid when he equates antisemitism with all racism in general. Antisemitism is uniquely Jewish, and it is demonic. The enemy of God—Satan—has a diabolical plan to eliminate the Jewish people. From Haman to Hitler, there have been plots and plans to wipe out the Jews—and millions have been killed. It is a hatred that has been violent and murderous for THOUSANDS of years…in words and deeds…and boycotts.

Let me explain: Jews tend to have two extreme positions about our “chosen-ness.” The first is that we don’t want to be chosen; we just want to be like everyone else. I am not merely referring to pre-holocaust Europe, where a vast number of Jews simply wanted to be known as a Russian or German, as opposed to a Jew, but all the way back to the book of Samuel where the Jewish people demanded a king, like the other nations. But the other side is one of pride—that our “chosen-ness” makes us better than everyone else. And that is not why God chose Israel.

Lapid and Netanyahu somewhat represent both of these views, respectively.

When God selected Israel to be His covenant people, he didn’t pick us so that we could lord it over everyone who wasn’t chosen! We weren’t singled out from all the other nations because we were so good or superior or intelligent (you get the idea). Our “chosen-ness” was not a stamp of superiority over the Gentile (non-Jewish) world but a call to servanthood to the nations.

And through Yeshua—the most famous Jew in history—God Himself in human form—that mandate was finally fulfilled. Yeshua—the Son of David, the Seed of Abraham, the Suffering Servant—did what we could not do for ourselves, bringing the gift of eternal life to the world. And it was the Jewish apostles who went from vying for position in the Gospel narratives to embracing true humility, as they took the message of Messiah to the nations.

Israel is still chosen under the Abrahamic covenant, but we are chosen to serve. Not to be served.

For just $100 per month you can bring the gospel to 10,000 homes. Join us as media missionaries! GIVE NOW
VIEW COMMENTS
« Becoming One With The Savior Tear Down the Walls »