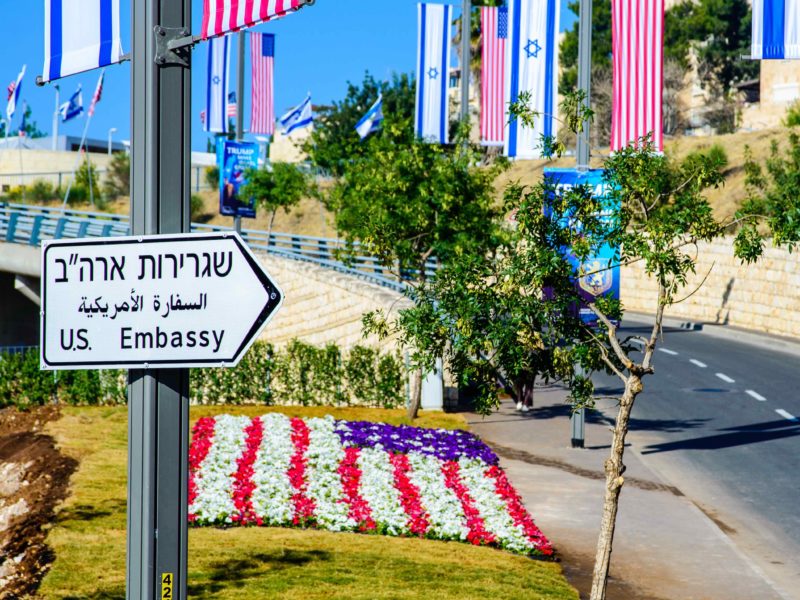 We witnessed history in the making in May 2018 when America established its embassy in the Holy City, acknowledging Jerusalem as the place King David established.

As I watched Benjamin Netanyahu give his speech at the embassy opening,  I was moved with compassion for his country and citizens as they, once again, received recognition of their capital. The Prime Minister’s words rang out praise for Donald Trump thanking him for being the President to keep his word and with these words, ‘Making history by recognising history’.

Our President is no ordinary politician but, a shrewd businessman that remembers the importance of history.

As I watched the ceremony of the opening of the embassy I was reminded that the following Sunday, May 20th, 2018 was Pentecost Sunday on the church calendar. There are some churches that follow a liturgical calendar and my church is one of those.  We celebrate Pentecost Sunday as we understand it is the birthday of the Church our Lord established.

The reclaiming of Jerusalem as Israel’s capital and the Feast of Pentecost coinciding lead me to understand how gloriously timed this was as a celebration of renewal for God’s people both Jew and Christian.

Now let this new season of Pentecost as we celebrate Pentecost Sunday on June 9th 2019 be a time of renewal just as Acts 2 tells us:

“On the day of Pentecost all the Lord’s followers were together in one place. Suddenly there was a noise from Heaven like the sound of a mighty wind! It filled the house where they were meeting. Then they saw what looked like fiery tongues moving in all directions, and a tongue came and settled on each person there. The Holy Spirit took control of everyone, and they began speaking whatever languages the Spirit let them speak. Many religious Jews from every country in the world were living in Jerusalem. And when they heard this noise, a crowd gathered. But they were surprised, because they were hearing everything in their own languages.

“They were excited and amazed, and said: ‘Don’t all these who are speaking come from Galilee? Then why do we hear them speaking our very own languages? Some of us are from Parthia, Media, and Elam. Others are from Mesopotamia, Judea, Cappadocia, Pontus, Asia, Phrygia, Pamphylia, Egypt, parts of Libya near Cyrene, Rome, Crete, and Arabia. Some of us were born Jews, and others of us have chosen to be Jews. Yet we all hear them using our own languages to tell the wonderful things God has done’.”

It is my prayer that, once again, Pentecost will bring about this marvelous ability for all people from every tribe, nation, and tongue to be able to hear and understand each other during a time when peace is needed.

Let’s tell others about the “wonderful things God has done.”

The Holy Spirit is our Comforter and Guide so, let’s allow Him to do just that in these troubled times when people throughout the world are still angry about Jerusalem being reclaimed as the capital. For sure, here in the USA, there are many in our educational systems, government and yes, churches who aren’t happy about the embassy move. We must pray for them and pray for the peace of Jerusalem.

For just $10 per month you can bring the gospel to 1,000 homes. Join us as media missionaries! GIVE NOW
VIEW COMMENTS
« A Call Back to Our First Love Will You Take Up A Torch Of Fire This Pentecost? »