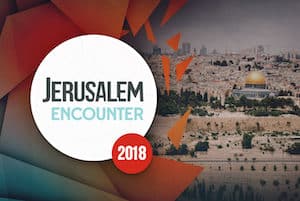 FIRM’s Jerusalem Encounter 2018 opened with spirit-filled songs in Hebrew performed by Joshua Aaron and Birgitta Landfall. The heart and vision of the three-day powerhouse conference was to inspire, network and build the living stones of Messiah’s kingdom in Israel.

Throughout the conference, hosts featured ministries serving the Body of Messiah in Israel through outreach and discipleship, local congregations, social justice, resources and training, prayer and worship and ministry to families. During the opening session of the conference, three local ministry leaders testified about their life-changing and strategic work in Israel.

The first ministry, Lech L’cha, a youth ministry that takes its name from Genesis 12:1, where God commands Abraham to “Go,” ministers to youth prior to and after their army service in Israel. It is the only Israeli organization that offers a comprehensive discipleship training program empowering young Israelis to build a firm foundation for their walk with Yeshua.

The second ministry, Netivah, encourages and equips the youth of Israel, pre- and post-military, to know God, live for Him and remain connected to the believing community.

The third ministry, Derech Avraham, sends Jewish believers to testify and serve throughout the Middle East. More Arabs than ever are coming to faith and that is something that Jewish believers want to be a part of. They shared the powerful testimony of a Jewish and Palestinian believer who ministered together in Iraq. This example of Kingdom ministry defies the patterns of this world and shows a radically different approach to life.

The evening’s main speaker, Don Finto of the Caleb Company and former pastor of Belmont church, stirred conference goers with a message about the interplay between the Bible’s promises and our prayer life: If it’s in the Bible, you can own it. The promises and commands are life-giving and they are ours to pray in and walk out.

Finto spoke about the duality of the times using as an illustration the parable of farmer who allows the weeds to grow together with the wheat until harvest. Finto said this indicates that both evil and good will reach full maturity by the end of the age. We will be living in a generation that is simultaneously the most wicked and the most holy the world has seen since the days of Noah.

This paradox, described in Daniel 12 where some awake to “everlasting life” and some to shame and everlasting contempt, characterizes the challenge of our faith: to know that as the world gets darker that God’s Kingdom is growing stronger. We must stand fast on the promises in the Word of God rather than listen to the bad reports in the news, he said.

Finto used Iran as an example: The country is dominated by a dark regime, but underground Christianity is flourishing. He exhorted listeners to live with constant expectation and confidence, to identify God’s purpose at this current stage of their lives and to take on an attitude of unrealistic optimism.

This article was written by Kehila News Israel